An Economist, a Journalist and a Novelist on Indian Identity

In last couple of months I read a few books that were about India. These books were written by people with a varied background. One was by Nobel Laureate Economist Amarthya Sen, another by former BBC man Mark Tully and two more by Shashi Tharoor. If you have noticed the title, I have considered Mr Tharoor as a novelist, though he was a former Diplomat and at present, a leading politician. The reason is that when I read his books, more than his attempts to showcase Indian situation like how a Diplomat would do or confirm it to his political ideology as a politician would do, it is his artistic understanding of it that makes me appreciate him. These four books are in no way stand-alone works. Though the viewpoint of authors may differ in certain crossroads, on the most parts they are complementary. All the books appreciates the basic Indian quality which are spoon fed to us from the time we started studying Social Sciences- Unity in Diversity. All these books, along with trying to understand the issues that the nation is trying to grapple with, emphasize that the solution lies in cementing this Indian virtue further deep.
In his collection of sixteen essays, The Argumentative Indian, Amarthya Sen tries to detail on the rich argumentative tradition of India, that he believes to be the reason for the past glory and the essential  requirement for future greatness. He finds the culture of discussion to be the thread that binds this heterodox nation with different religions, geographical peculiarities, many cultures, beliefs and languages. A detailed study of argumentative tradition from the times of Kautilya, Ashoka and Akbar to Tagore, Gandhi and Satyajith Ray can be found in these essays. The book also deals with present predicaments that the country finds itself in and how these can be resolved by using our rich tradition of discussion. 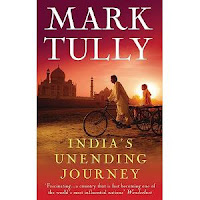 Mark Tully was born in Calcutta to British parents. He had worked for BBC, Delhi for around 3 decades. In the book India's unending journey, Mark Tully emphasize the importance of religion in an Indian concept as the light that should lead the way. In this autobiographical book, he describes his spiritual journey from the certainty of Semitic religions to the uncertainty of Indian religious beliefs. This uncertainty, the belief in doubt, in his own words is one reason Indian society can tolerate pluralism and live together. It is this taking of middle path, finding the right balance between extremes that should be followed for living together.

In his book The Elephant, The Tiger and The Cellphone, Shashi Tharoor equates India to an elephant, which is huge and gracious but slow and lazy, turning into a tiger with stripes after continuous taunting and teasing by other faster, efficient animals. A few decades back India was a poverty stricken nation, content of living in a glorious past. With the opening of doors by globalization, enormous leap in mass communication  and the end of license raaj, the situation is fast changing. This collection of essays, deals with these changes and its impact on India and the outside world. The range of subjects touched by the author is mind bogglingly varied. From changes in society to politics to cricket to art and entertainment, this book can be an introductory course to new India.

Riot is another book by Shashi Tharoor that I decided to include in this list, because even if it is a novel, the subtle allegory it offers to the careful reader cannot be missed. In a small village, Tharoor masterfully recreates the whole Indian Panorama, thereby providing some insights into the working of the society that we live in. The novel crafted in a non linear time line, with newspaper clippings, excerpts from personal diaries and letters, tells the story of an American social worker who reaches an Indian village only to be killed in  riot. Her divorced parents comes from US to come in terms with the hard truth and the interactions with the people with whom their daughter interacted during her stay takes the story forward. This is a novel with various layers built in it. It tries to analyze the psyche of riots, of Indian way of dealing with things, of relations and sexuality in the sub continent.
Labels: Amarthya Sen, books, India, Mark Tully, Shashi Tharoor
Email ThisBlogThis!Share to TwitterShare to FacebookShare to Pinterest
Posted by Harish P I at 5:02 PM