Cambridge Analytica, the British political consultation firm is in a soup nowadays. It seems they use the personal details of Facebook users in winning elections for their clients. They are facing criminal charges for this in the USA.

When the news came in, Indian political scene also became muddled (as is the norm nowadays). BJP cited an old article which claims INC used the help of Cambridge Analytica in election campaigns. Rahul Gandhi in turn accused BJP of using their services.

A whistle blower claims that INC is one of the major customers of the firm. Now latest news breaks confirm that INC's campaign poster is framed in the office of the ex CEO of Cambridge Analytica. This remembers me of the infamous scene penis enlarger scene in Austin Power movie. (Check YouTube.)

My doubt is very simple. If you're going by the electoral performance of Congress party in recent years, it is evident that Cambridge Analytica is a huge failure as a political consultancy. And their method of collecting Facebook user identities is not working at all. It even seems to have an adverse effect.

BJP probably should be thankful to this firm, which may be one of the reasons they are in power in majority of India. They are supposed to keep quiet and let the drama continue...

Labels: current affairs, India, politics
Email ThisBlogThis!Share to TwitterShare to FacebookShare to Pinterest
Posted by Harish P I at 12:20 AM 0 Comments 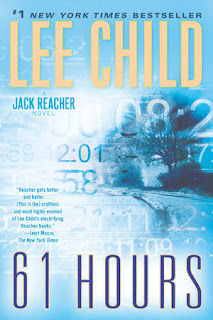 61 Hours is the 14th Jack Reacher novel written by Lee Child. I've read some 6 or 7 of his works and always felt Jack Reacher books provide adequate thrills and entertainment- nothing more, nothing less. The basic premise is always similar. Jack Reacher, the perpetual traveller, reaches a corner of USA and gets involved, mostly against his wishes, in some trouble and settles it by the end using his brain and brawn.

61 Hours uses the same formula. This time Reacher is a traveller in a bus carrying some senior citizens, while it breaks down and is forced to stay in Bolton, a prison town. He has to endure snow fall and heavily fallen temperatures while solving a mystery involving murders of crime witnesses, lawless bikers, a mysterious structure concealing hidden secrets from Cold War era and a powerful drug baron from Mexico.

I loved the overall plot. Its really thick and carries suspense adequately. Compared to other Reacher adventures, this one is more mellowed and introspective. And thrills come far in between. But it never hampers the pacing. I loved the detailed description of landscapes that Lee Child etches in his novels. That differentiate the otherwise similarly plotted from each other and provides each with a unique signature.

The title doesn't have any significance to the story. I felt it as just a gimmick and doesn't contribute anything to the plot. The countdown in every chapter appears to be added in later drafts of the novel. I feel it is included just to invoke a false urgency to the proceedings.

Likewise I felt that some of the suspenseful passages are too drawn out and lessens the impact of the story. You wait eternally, with bated breath, along with the characters, when entire passages are dedicated to every leaf turning and every snowflake falling, only to find that ultimately nothing happens. This event has a significance that is revealed later on but at the cost of some frustration to the reader.

But it really was a welcome change, reading a Jack Reacher book that is not just a collection of one frantic action set piece after other. The ending also was very different from usual fare. The ambiguous ending was unexpected, but gave more gravity to the story. And makes me want to grab the next book in the series...
Labels: books, English, fiction, Jack reacher, Lee Child, thriller
Email ThisBlogThis!Share to TwitterShare to FacebookShare to Pinterest
Posted by Harish P I at 11:34 PM 0 Comments
Newer Posts Older Posts Home
Subscribe to: Posts (Atom)