Some time back I had reviewed the first installment of Ramayana retold by Shubha Vilas, Rise of the Sun Prince, which ended in the royal wedding of Sri Rama. The author had send me a review copy of book 2, Shattered Dreams. The book continue the story of Rama from where the author left us in book one. Now, this was one part of Ramayana that I never felt inclined to read due to the family story and  heavy dose of emotions and sentimentality between characters. I am never a Kabhi Khushi Kabhi Gham person being more a fan of the Gadar thing that follows it. May be that was why I delayed reading the book for some time.

Dasaratha had a terrible dream one night. He infers that his past is catching up and it is time to retire. Logically, Rama, the elder prince is announced as successor. The whole kingdom rejoices in King's decision because everyone loves Rama due to his virtues and are sure he will excel in his role as emperor. But Manthara, the maid of second and the King's most beloved queen Kaikeyi, successfully manipulate the queen to force Dasaratha to change the decision. Kaikeyi, siting an old promise by the King makes him to send Rama to exile for fourteen years and give the throne to Bharatha, her son who is currently staying with her father.

Chaos follows in the kingdom, but Rama, being a noble son, gets ready to obey his father and move to the forest. What follows is his interactions with his dear ones, his mother, wife and brother, where he convince them about the correctness of his decision. His brother Lakshmana and wife Sita accompany him to jungle. Dasaratha, overcome with grief dies a sad death. When Bharatha hear the news he is immensely sad. He follow Rama and request him to return back. Unable to do that, he returns with the sandals of Rama inorder to throne them and rule the kingdom as a mere representative of them. Parallel to this story, the ascent of Ravana is also told.

As I told in the review of the last book, it is written with the intention of being a guide to the reader, for using the principles of Sri Rama in their lives to tackle situations that present unique dilemmas, to inspire readers to follow the right path and not depending on the convenient one. The bonus is that the story is narrated beautifully. Shubh Vilas manages to convey the emotional gravity of the story to the readers effectively. The characterisation adds to the narrative and we are able to feel in sync with even the minor characters.

To summarize, Shattered Dreams is in every way a superior follow up, and a useful one too, to the first part of the book. 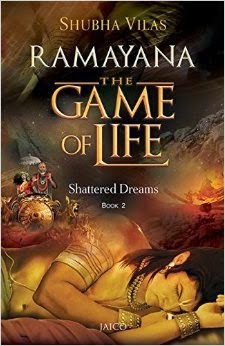