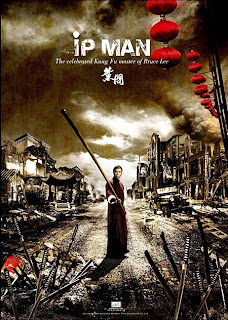 or Yip man as he is some times known, was a master martial artist who taught Wing Chun to public for the first time. He was the teacher of several well known martial artists, the most famous being Bruce Lee. I happened to watch this Chinese martial art movie Ip man, partially based on the life of legentary master. I love the genre from a long time. Actually before watching Hollywood flicks, I had been a regular viewer of Hong Kong action flicks, especially that of Bruce Lee, Jackie Chan and Jet Li. Movies like Big Boss

used to amaze me with the lightning fast, gravity defying action.

, although a biopic, follows the regular Kung fu movie pattern. The fights and drama are a bit restricted, but the overall style is like a Wong Fei Hung legend.

Ip man leads a peaceful life in Fushan with his wife and kid. Though many adverseries come to test his talent, he is reluctant to exhibit his skills, as his wife does not like it. But everyone acknowledges that he is the best. And then bad times strike. Japanese invade China, and Ip man becomes homeless like thousands of fellow Chinese. He works as a laborer. A Japanese general is hell bent on arranging fights with his soldiers and Chinese, and many Chinese masters take up the oppertunity to kick some Jap ass. The death of his good friend and another fellow master on the hands of Jap soldiers causes Ip to retaliate. General wants him to teach martial arts to Jap soldiers when he saw him singlehadedly bashing 10 soldiers. He declines causing the wrath from General and subsequently goes into hiding with family. He also starts coaching common people to defend themselves. Finally Ip is cornered and forced for a final showdown with the general.
﻿﻿
﻿

The story drags in certain parts and the treatment forces us not to take the story as a serious biopic, atleast in the initial scenes. The acting part is wonderful. Donnie Yen impresses with his restrained acting style and peaceful looks. The supporting cast is also good although there is nothing much for them to do other that getting kicked by Yen for most of the time. Sammo Hung (remember My lucky stars

?) is the action director and action is nothing short of awesome. In the initial part of the movie, action is mellow and mostly comic, showing Ip's disinterest in exhibiting his skills. He just blocks the punches and defends most of the time and when feels that things are getting out of control, finishes the fight abruptly. But on latter part, when he is out for revenge, the action turns violent and totally offensive. The scene were he beats up tn Jap soldiers is the most surprising part. Too good.

Seems they have made a sequel

where Ip goes to Hong Kong and establishes a school there and eventually meets Bruce Lee. Waiting for a chance to watch it...

On other news, last week I happened to watch a Kannada adaptation of a play by Tagore, one that criticises the politics of the land. Although interspersed with contemporary politics, I was not much impressed, I should confess.

Ipman 2 happens to be as good as the first part. The movie chronicles his life in Hong Kong where he starts his Kung Fu school. Action and acting is as good as the first part and along with Donnie Yen, Sammo Hung does a very good role. Nice movie...
Labels: movie
Email ThisBlogThis!Share to TwitterShare to FacebookShare to Pinterest
Posted by Harish P I at 8:07 PM