My views on the controversy surrounding The Hindus: An Alternative History

I read the book in parts. I was planning to read it thoroughly before making this post. But couple of days back I happened to read many articles published around the globe about the controversy surrounding it and some of them had excerpts from the book. By then I had just read two chapters of the book. It was perplexing that the passages quoted in the articles were totally different from the two chapters that I read, which were elegant and had the tone of a well researched paper. Curiosity made me to skim the book and read the quoted controversial passages and try to find the context in which they were written.

Most of the book is about marginalized sections in Hindu society and I found it well written and sensible. But the parts that tries to interpret Hindu mythology is written in an extremely demeaning manner and the prose lacks any academical quality. Its as if two different people with extremely different agendas has authored it. I felt that the author consciously tried to contract atleast some of her interpretations of Hindu scriptures into narrow circles of lust and incest, losing out on the wider meaning and symbolism somewhere and finding non existent treasure troves elsewhere.

And then comes the strange behaviour of intellectuals. Some of the stock words thrown out by them include Talibanism, Hindu fundamentalism, Fascism, arm twisting and banning of books. After reading the articles, national and international, about the story, I feel either it is over reaction or oppertunism. The plaintiff is a small outfit that want to alter the educational system of the country. There was no fatwa, no physical threat to writer or publisher, no incident of violence, no public hate speech till this time. They had just filed a case that the content of the book slanders their religion unnecessarily. Did Taliban ever approach court with their grievences? Or in that case Fascists? Did Ayatullah Khomeini consult law before issuing Fatwa to Rushdie?

Another interesting fact is that court has not yet banned the book. There is no court order saying that selling, purchasing or possessing this book is crime. (You still cannot possess a copy of Satanic Verses in India). Penguin India agreed for an out of court settlement and took back the copies in circulation. But the book can be purchased from other countries and brought to India and can even be downloaded as digital version domestically. Why did they not opt to carry on with case and back the writer, when there is even an option to go for appealing if the court verdict is against them?

In every interview with the writer, that I have read, she just shifts the blame on Hindu fundamentalists. She always maintain that her book is an alternative history of Hinduism. Did she ever check the back cover of her book? Or the book description in Amazon? It uses the adjective 'definitive' to describe the book. How on the world can an alternative history become definitive one?..

These are my views on the controversy. I accept that others can have different views. You can call me a Hindu Fundamentalist after reading this post. (Those who personally know me will laugh at you). But I'm never going to call you sickular.

Labels: book, books, current affairs, mythology
Email ThisBlogThis!Share to TwitterShare to FacebookShare to Pinterest
Posted by Harish P I at 9:27 AM 2 Comments

Land... a resource that is limited, that cannot be created or destroyed, that cannot be moved and is difficult to attach a price tag on to. Different people maintain different view points regarding it. For some it is home, for some livelihood, for some a commodity to trade and for some it is a means to go back in time. And land is one reason why sane persons behave like mad causing feuds and violence, why families disintegrate, why nations fight fierce battles altering the course of history. No Man's Land is the second novel by Nilesh Shrivastava which narrates the tale about a piece of land and its effect on the lives of many people who gets associated with it.

This is the story of Agastya, a dying man, whose only legacy is a piece of ancestral land in Gurgaon, which was considered waste by his family of paint merchants. After it reaches him, he along with his mind keeper Saswat, turns it to a farm land of breathtaking beauty. Now on his deathbed, he has to decide its future, and for that he has to confront his past... his two sons Karan and Pranay. But they come to the farm land from the city of Delhi with their own troubled pasts, prejudices and agendas. What furthur complicates the already fragile situation is the presence of a woman involved with them in different levels. Agastya's paradise on earth turns to a stage on which each character display their greed, pent up emotions, desires and hidden motives.

No Man's Land is told in a non linear time line. The story spans three generations. Each chapter start with a monologue in first person that is italicized. Only later does the reader become aware of the identity of the speaker. Then narration shifts to third person. The story is told devoid of much melodrama. The characters are planted solidly on earth. Every one of them are three dimensional entities- complex and realistic. This makes the reader relate to their motives and get convinced with their behaviour.

The novel is all the more interesting due to its subject matter- greed of men towards land. The story is set in Gurgaon, at a time when real estate tycoons had for the first time set their eyes there. Social relevance of the plot and the setting makes the book a compelling read. Adding to this aspect is the finely written story, well etched characters, a plot that piques the curiosity of the reader by gradually building suspense and a climax that goes well with the pace of the narrative.

The last book by Fingerprint that I read was The Virgins, which was a delightful one. Now this one is yet another ace for them. The overall packaging of the book- cover design, paper quality, printing, etc. is done very professionaly, compelling the readers to take this book seriously. One complaint, that I have with most of the Indian novels these days, plague No Man's Land too- silly errors, that could have been corrected with a bit of care. It is a disgrace that a few grammatical and editing errors can creep up into such a competendly made book- like finding a few granules of rock in a delicious plate of biryani. 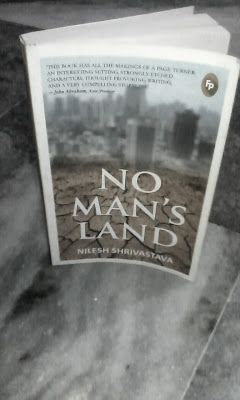