I stopped writing anything in this blog from around a year. Last day somebody asked me why did I stop doing it. I asked that person, did he ever read what I wrote. He replied that he did read it, not regularly, but once in a while. I asked him how did he feel about that. He replied that he found it interesting to read my views and that many times I brought some interesting perspective to the topic about which I was writing about.

Then I asked him something important. I told him that we are good acquaintances from some time. But it's news to me that he read my blog. I asked him, why is it that I never ever knew he reads it and like my work, atleast sometimes. I told him that's why I stopped writing down my thoughts. If he and atleast a few others like him had made it known to the world that this blog has a voice that they liked, I would have continued with it.

I don't know if it's 3 people who read it, if it's 30 or 300 or 3000. I don't have any idea. As far as I never get feedbacks and a general idea of the reach that my posts have, for me it's the same if my readership is 3 or 3 million. I don't know what's the worth of my writing because I don't get a tangible knowledge of its reach. For me, I'm writing for a reader who is a total introvert and not interested in communication. And being the person that I am, I always conclude that it's my writing that's at fault.

Yes, there are 5 persons whom I know, who regularly reads and feedback to me through social media or comments. And that's it. Other than that there are many who compliments me when we meet somewhere randomly, like my friend whom I introduced in the beginning. And I'm not interested to manipulate people into giving my blog a social reach.

So that's it. I'm totally bored with blogging scene. And with the way life's going now, I may not take it up in near future. Because blogging had become boring, monotonous and there are lot more better fun activities going on in life..
Email ThisBlogThis!Share to TwitterShare to FacebookShare to Pinterest
Posted by Harish P I at 10:05 PM 0 Comments

Genesis and everything after that..

Thus whispered the copper maiden,
Seated on a worn out swing,
"Our story's tied to this ring,
And you know what, it's just beginning... " 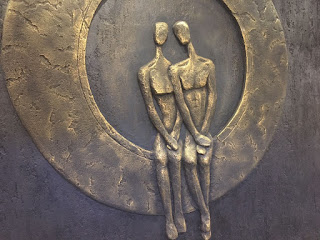 And then, out of nowhere, they appeared at the center of cosmos. That statement isn't entirely correct. It was when they, the copper maiden and her man, appeared, seated on a huge copper ring, the cosmos reoriented itself with them as the center.

So armed with a sense of time and space, cosmos evolved. And it would have been the most fascinating sight, but alas there was none to witness it. As you can imagine, sight was a phenomenon that was yet to be evolved. Also same was the case with the other four senses.

Most sensible out of you may now question the above statement. If senses weren't developed yet, how could the Copper Maiden whisper to her man..! And that my friend is the issue with recording of history. It fictionalise the facts to some extent, or rather to an extreme extent. It romanticise situations and make them palatable to the laymen.

Now talking about the evolution of cosmos, with the maiden and her man at its center, it won't be wrong to say that it was an extremely boring process. It took 9 succeeded by 100 million zero years. Of course, year was a concept that originated at first just before 10 million years back, and cascaded in every nook and corner of cosmos with great efficiency.

And all that time the ring, the maiden and her man hung there on the same spot, whispering indecipherable love poems in each other's ears. Right, I am getting carried away here. Their whisperings are indecipherable, so who knows if it is love poems or nagging complaints or a news bulletin!