Jim Morrison: Beyond The Doors Of Perception 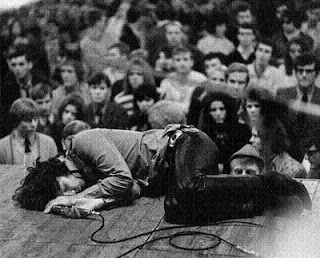 The history of rock music is interspersed with anarchy, craziness, poetry, restlessness, violence, histrionics, excesses, radical politics, discontentment, drugs, sex and alcohol... and the name of Jim Morrison is on the top. James Douglas Morrison, or Jim Morrison as he is known to his fans throughout the world, or Lizard King as he was known to himself, is one of the most contraversial rockers and the main reason for the psychedelic rock band, The Doors to be one of the best in its genre. In his 27 years of existance, in which his musical career accounted less than a decade, he had been a poet, vocalist, rock star, movie buff, selfish, arrogant, bully, maniac, drug addict, alcoholic and the most influential and iconic singer of his time. In his final days he was living in oblivion, in a foreign land, whereabouts not even known by fellow band members and died a mysterious death as shocking as his entire life....
In this biography Jim Morrison: Life, Death, Legend

, Stephen Davis tries to uncover the mystery surrounding this strange and much mistook persona, with a little success, but in the end falls short because of may be the deficiency of authentic material. Any one close to Morrison was dead or hated him. And the poet himself never exposed himself fully to anyone (if you does not count the obscenity charge against him after a concert in Miami). He always kept several pockets of secret friends totally separated from each others. So in the end Davis ends up throwing more mystery to the already dark story with many loose threads hanging.
Jim Morrison was the son of an admiral, who maintained accute strictness in his family. Jim grew up to be an acadamically bright bully and prankster, who hated authority. His practical jokes bordered on extremes. He became addicted to movies and books in a very young age. A sighting of an Indian family injured in an accident left a deep impression in young Jim's psyche. He claimed that one of them had entered into his mind then. By the end of adolescence, Jim had started reading Neitzche, Rimbaud, Blake, Huxley and contemporary beat writers. He was much hooked on to movies and ended up pursuing a graduation in movie- making against the wish of his family. Although his graduation movie was disliked by majority, those who liked it really loved it. A despaired Jim took on to poetry, drugs and alcohol- excessively. His friend Ray Manzarek decided to form a rock band with him after he heard Jim singing one of his poetry on a beach. Jim decided the name to of the band to be The Doors, after Huxley's book The Doors Of Perception

. Initially they struggled a lot but with the addition of John Densmore and Robby Kreiger, the band started evolving. Jim's poems where the soul of the band.
On stage, the psychological books that he used to read gave Jim a lot of chance to experiment with the audience psyche, an art that he perfected over time. His drunken antics, swearing and Greek god looks got him a huge fanbase. After performing in several bars, finally they got a chance to work with Elektra records, with whom they cut all their records. The name Elektra gave Jim a chance to flex his Oedipus Rex complex on stage. This time around he met Pamela Courson, with whom he maintained a relation through out his life, though he had countless on- off relationships with many women.
He was much loved and equally hated for his stage persona. His drunken antics and stubbornness, no care attitude and disheveled life style constantly embarrassed those who loved him. By a few years he became distanced from his band members. When they decided to sell a song to a motor company to use in an ad, he severed all personal ties with them. A song on Vietnam war, The Unknown Soldier, made the Nixon administration to consider The Doors as one of the adversaries. The author believed this ended in much negative publicity to the band, especially with the Miami incident when Jim allegedly exposed himself on public, even though there was not a single photographic or videographic evidences to indict him.
His public performances also were never predictable, some times he created magic on stage, but other times he was pathetic. He became disinterested by the end and wanted to pursue his real ambitions, poetry and movies. But due to his rockstar image he was never considered a poet by his contemporaries although posthumously his poetry was taught in several universities. He moved to Paris in his final days, with his love Pamela and was one day found dead in his apartment, probably due to a drug overdose.
His grave is one of the most visited site in Paris. Even after death Jim Morrison never became obsolete. His anti establishment, chaotic verses and dare devil life style continues to inspire millions, for good or for bad.
Labels: books, jim morrison, music
Email ThisBlogThis!Share to TwitterShare to FacebookShare to Pinterest
Posted by Harish P I at 8:42 PM