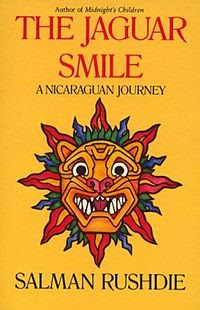 The Jaguar Smile is a travelogue by Salman Rushdie written after his trip to Nicaragua in 1987. A word of caution to anyone who picks up the book for reading: it would be netter to brush up your awareness of political situation in Nicaragua at the time because author does not bother to introduce us to it. I was lucky as I had read Nom Chomsky’s book Deterring Democracy some time back in which a whole chapter was dedicated to detail the struggle for power between Sandinistas and Contras.

Sandinistas were the group that formed government in Nicaragua under the leadership of Daniel Ortega after pushing the dictator Somoza out of power. They were at first supported by US and had a developmental outlook towards the country. Later US accused them for helping rebels in El Salvador and sanctions were imposed. A group of counter revolutionaries named Contra were formed, aided by CIA to oppose Sandinistas. Thus the war started between Sandinistas and Contras, who adopted guerilla warfare. Contras received financial and technological aid from CIA and there are proof that CIA instigated terrorist attack against civilians. Public outcry against the human right violations by Contras forced US government to stop aiding them, but lot of illegal funds from selling arms and drugs were channeled to the help of Contras. Bombing of Nicaraguan harbors by CIA caused Sandinistas to give a case against US in international court, which told US to give a hefty sum as compensation. It was never given.

Elections were run in Nicaragua which were deemed free and fair by United Nations and many other agencies of foreign governments except US.  Sandinistas ruled till 1990 when they announced election. By the time the economy and law and order in Nicaragua was totally collapsed due to sanctions. Contras promised stability in economy and law and order if they gain power. Though Sandinistas had majority in exit polls, after elections contras came into power. After many years Sandinistas were able to regain power and Ortega is still the President of Nicaragua.

Rushdie went to Nicaragua with the invitation from Sandinistas. In this travelogue he writes about his experiences in the country and the political situation he faced there. Now, from the outset it is clear that Rushdie is sympathetic to Sandinista cause. At first he is little concerned about the lack of freedom of press and censorship he saw there. But gradually he gets convinced that in a country in war there has to be certain restrictions. Rushdie mentions about many important people who has contributed to the growth of Sandinistas, like Sandino on whose name Sandinistas was derived. He meet many Sandinista elite, most of them having strong literary inclinations, like novelist Sergio Ramirez, who was then Vice President. He interacted with people from many walks of life, from President Ortega to common peasants. He is impressed by the developmental works happening in the countryside, like land reforms.

Buy the book :
Labels: books, politics, salman rushdie
Email ThisBlogThis!Share to TwitterShare to FacebookShare to Pinterest
Posted by Harish P I at 7:24 PM