The curious incident of dog 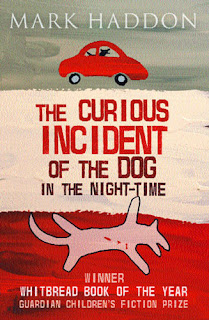 Curious incident of a dog in the night-time is an award winning debut novel by Mark Haddon. The story is told in the form of a book written by a fifteen year old special child, Christopher Boone (‘a mathematician with some behavioral difficulties’ in his own words) about the incidents following the murder of his neighbor’s pet dog. The boy shows autistic behavior though it is nowhere mentioned in the story. He has a unique talent with numbers, facts and figures, but has difficulty with fathoming emotions and normal social behavior.
Book starts when Christopher Boone finds his neighbor Mrs. Shears’ dog killed in her garden. He is arrested for hitting the police officer who tried to question him about it. Though he promises the cops and his father that he will forget the incident, he plans to investigate it. Christopher lives with his father and is told that his mother is dead two years back. He starts maintaining an investigative diary, which is actually the book that we are reading. His father is infuriated when he sees the book and confiscates it. While searching for the book in his father’s room he finds out some truths about his past and comes to know that he was kept in dark. He also suspects that all these are linked with the murder of the dog. This sets off a chain of events that causes much pain to all concerned with him.
Though the plot is predictable and a bit bland, the narration style is captivating. Christopher writes his story devoid of emotions in a matter- of- fact manner. But his inability to connect with other people’s mental situations touches a chord with readers. The book emphasize on this difficulty successfully. I would recommend this book for adults and readers in their late teens. There are certain parts were expletives are used. So reader discretion advised.
Other two books that I read recently but do not deserve a separate blog post are The Comedy Collection and Life Ever Laughter. The Comedy Collection is a collection of comic pieces compiled from different sources by acclaimed Academy award winning actor Peter Ustinov. The book is fine for light reading, but as I had read many of the better pieces in the book, I felt a bit bored by it. Life Ever laughter is an autobiographical book written by American comedian Jerry Clower. He Is a believing Christian who does standup comedy. The jokes in the book are pretty good and told cleverly and that’s it about this one.
Labels: books
Email ThisBlogThis!Share to TwitterShare to FacebookShare to Pinterest
Posted by Harish P I at 6:47 PM