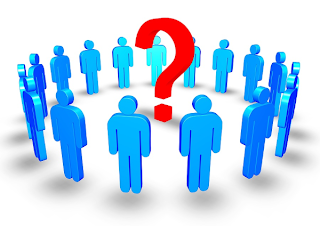 One thing that I learned after working these many years is that, right questions are to be asked to take right decisions. There may be thousand urgencies around you that screams and screeches to do something that you may not be that sure of. Do not let these urgencies skip that exercise of mind, thought process, as my good friend put it in words some time back, where you collect the ideas, mull over them and finally the most important part, ask questions. Skipping this process will cause several troubles in future.
Recently there was a man power issue in my department. I needed around three people, all technicians. The problem was not affecting the performance in a large way as my team put up extra effort and hours, to run things as it was before. But still it was a strain for all and this arrangement could fall flat any day if it was allowed to continue for a longer time. Another issue was that after getting man power, we need at least a month’s time to prepare them for functioning. And with the year end nearing I could not afford to make a delay.
In our company, normally interviews only happen for employee level appointments. For contract employees, the procedure is to inform the HR department of the requirement and them allotting man power directly to the user department. Last day morning I got a mail from HR department that an ITI holder is allotted to my department. I immediately called him and had a conversation as I had to allot his work. When I asked what his trade was, he answered that he wasn’t an ITI holder. Then I told him that I will have to give him training for at least two months as he is not a technical person. Finally it was revealed that he has studied accountancy and as he never got any job, he came as a contract laborer.
He insisted that he will do whatever job I tell him to do. I thought over it. There is a real problem facing me. The immediate solution is to train up this desperate man and make him do the work. Then I asked him that question which helped me decide. I told him that the work that I give him will be physical. He has to be in shop floor and do it. Suppose he gets an accountancy job in near future, will he go for it as it involves comfortably sitting in working hours or will he stay back here at least for a year? I asked him to go back to my department, i.e. tool room, see the kind of work that happens there, interact with other workers, decide and come back after an hour’s time.
He came back after an hour and agreed that if he gets an accountant job later, he will leave this one. If I had not asked him that question and decided to take him for work, he would have silently taken training and moved out when he get a job related to his trade. I will be stranded midway again and all my time wasted giving training to him which ultimately did not do any good for him. I talked to my colleague and gave him a job in packing department where he can perform without any training.
Labels: career, job
Email ThisBlogThis!Share to TwitterShare to FacebookShare to Pinterest
Posted by Harish P I at 7:00 PM