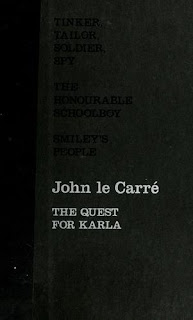 George Smiley is no James Bond. The only common link between them is that both of them work for British secret service. Ian Fleming’s Bond is a ruthless, handsome and stylish super spy who globe trots, conducting missions for Her Majesty using highly advanced gadgets, splitting his leisure time between wine and women. The highly glamorous portrayal of Bond is no where similar to reality. John le Carre’s character George Smiley is an aged, overweight man, in thick spectacles and ‘dresses like a Bookie’. He is much unpopular with women folk unlike Bond. Rather Mrs. George Smiley is the one who is luckier with her men.
If we take the novels, Ian Fleming’s Bond novels being the most successful in espionage genre, we can find that they stand in extremes. Bond novels are largely escapist, have frantic pacing, happen in exotic locales and are glamorous to say the least. But the novels featuring George Smiley are more detailed needing careful reading and are more intellectual. Most of the action happens in offices, safe houses and such beurocratic settings. The heavy spy jargon gives it a realistic touch. Another difference lies in the importance given in psychological duels between characters. While in Bond novels the division of good and evil is a straight line, here it is more ambiguous. All principal characters have their own inner demons to fight with and all their actions in the outside world are just manifestations of these fights. Among them George Smiley stands tall because, though flawed, he still has some goodness left in him.
George Smiley appears in eight of le Carre novels, in minor and major roles. Three of the recent novels, written after 1970, are published in an omnibus edition titled The Quest for Karla. The main reason I got hold of the book was the glowing reviews for the film adaptation of the first novel, Tinker, Tailor, Soldier, Spy. All reviewers praised the movie unanimously and after reading the synopsis of it I was sure this one is  better read than seen. Thus I sat with three of the most interesting novels, exhausting nevertheless, that I read in recent times.
The title Tinker, Tailor, Soldier, Spy is derived from a nursery song. It is suspected that there is a mole in the high ranks of British Secret Agency, Circus and George Smiley is called from forced retirement to unearth the mole as he is the only one above suspicion, thanks to his ousting. The primary suspects are the top four brasses of Circus, who reached there by ousting Control Smiley’s ex boss. Now without the knowledge of any of the suspects Smiley has to find out the mole, codenamed Gerald. Karla is the Russian agent suspected in installing Gerald.  Karla is a presence all through the trilogy coming out only in the climax of the last novel.

The second novel The Honorable Schoolboy happens just after Smiley finds out who is Gerald. (So I would advise any reader intending to read these novels, not to read this before the former novel as the suspense is revealed.) Smiley is the new in charge of Circus and in order to get a trail on Karla he tries to find out all those cases suppressed by Gerald. This leads his team to Vientine, Laos, to a trail of money paid from Russia. Smiley sends Jerry Westerby, nicknamed The Honorable Schoolboy to Hong Kong for the investigation. The novel narrates how they thwart the plan of Karla to extract a mole from Communist China and save the face of Circus. Jerry Westerby is a character that comes probably nearest to James Bond. The reader sympathizes with him when he almost sabotages the operation by mixing his personal interest in it. 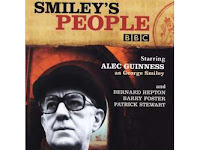 In Smiley’s People, Smiley is again called out of retirement to sweep the murder of a double agent beneath the cot. Instead of doing what was told to him Smiley looks deep into the matter, suspecting Karla’s hand. He finds for the first time a weakness in his opponent and taking full advantage, goes into offensive, employing Karla’s own methods to get the breakthrough.
If we watch closely we can see that the relation between Karla and Smiley reversing in the trilogy. In Tinker, Tailor, Soldier, Spy, Karla is captured in a jail in Delhi and Smiley tries to bring him over to his side. Karla like a stone wall ignores him. Smiley had a framed picture of Karla in his office and many times his colleagues look into his obsession with Karla as a weakness in him. Many like Connie Sachs, proclaim they are similar men, the very thought Smiley revolts against. But by the end of third novel Smiley finds that they are similar.
Labels: books, George Smiley, James Bond, John Le Carre
Email ThisBlogThis!Share to TwitterShare to FacebookShare to Pinterest
Posted by Harish P I at 6:20 PM