The (Fake) Autobiography of an Artist by Kurt Vonnegut 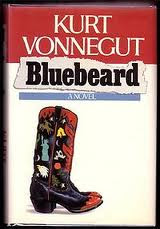 The reason why I picked up Kurt Vonnegut’s novel Bluebeard: the Autobiography of Rabo Karabekian (1916-1988) to read is the high praise I heard of Slaughterhouse 65 written by him which is there in my must read list from sometime. Bluebeard looked much different from the kind of novel that I assumed Slaughterhouse 65 to be. That one was touted as a science fiction black comedy and this looked more of Roberto Bolano kind of stuff. Before picking it I even read a few pages, just to be sure. I was not sure as I couldn’t find any humor in those first pages like the book jacket shouted. Nevertheless I picked it and after reading the whole book, felt that it was the right thing to do.
Bluebeard is written in first person narrative, in the style of an autobiography by an artist. Rabo Karabekian is an arrogant old one eyed rich man, living a life of solitude in his big house in a beach. A failed novelist gives him company along with his cook and her teen daughter. He has the best collection of abstract expressionist art in his private gallery. One day he meets a mysterious lady on the beach and strikes a friendship. That is how Circe Berman, the widow of a doctor moves in his home. She turns out to be a manipulating kind of lady and makes Karabekian write his autobiography. There starts a love- hate relationship between them when she takes over his life totally.  The only place that Circe cannot enter however she tried is the potato barn, which Karabekian has locked as it is the home of his secret, one that should be revealed to the world only after his death, according to his will.
The reader gets an insight into his personality by reading accounts of his past, his talent to make lifelike paintings, his love affair with his master’s muse, his military experiences, his admiration to his master and his later hatred towards him. His master Dan Gregory hates modern art and may be that is the reason Rabo took to it strongly. He stops making paintings when all of his abstract paintings drawn by using Sateen Dura-Luxe wither away in different parts of the world leaving behind empty white canvas, causing him much embarrassment and humiliation. He collects paintings of his painter friends with the money he inherited from his second wife.
The novel has an ironic, dry style of prose, which complements the mechanical existence of Karabekian.  There is a liberal spread of humor throughout the book, though very subtle and mainly ironic. Well developed characters make a deep impression in the reader’s mind.  The best thing about the novel is its climax due to two aspects. Climax celebrates the importance of doing those things that appeals to us, when Rabo Karabekian sheds his inhibitions about art and life. It is inspiring. Second thing that I liked about climax is the revelation of the well guarded secret. So much of built up and importance is given throughout the book for the secret in potato barn that if it was anything ordinary, the whole plot would have collapsed. But Kurt Vonnegut shows off all his mastery in making images out of words in that one chapter and makes sure that when the reader closes his novel after reading, it is with a sense of fulfillment in the mind.
Labels: books, Kurt Vonnegut
Email ThisBlogThis!Share to TwitterShare to FacebookShare to Pinterest
Posted by Harish P I at 6:00 PM