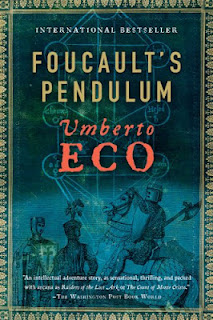 I like reading books those challenge me- books those alter my perception about society and life, books those need the kind of reading that is introspective as well, like Zen and the Art of Motorcycle Maintenance or The Argumentative Indian. I like those fiction books that require a certain amount of exercise from the reader’s side to comprehend them fully. Though reading those causes quite a bit of stress on the intellect, it happens in a good way, like the brain has done a workout session in gym. A recent book that had such an effect on me is Italian writer Umberto Eco’s novel Foucault’s Pendulum.
The first book of Umberto Eco that I read was titled ‘How toTravel With a Salmon and Other Essays’. It was a satirical collection written in the style of self help manual laden with a generous dose of irony. But before that I had acquainted myself with Eco’s work, through the movie version of his best seller debut novel ‘The Name of the Rose’ starring Sean Connery. I was planning to read it and had even located it in my library, but the tiny font size made me change my decision. That was when I saw Foucault’s pendulum and decided to give it a go.
This novel is structured like a maze, a labyrinth of plots and subplots spanning centuries, linked and interlinked with each other. Novel begins with an editor, Casaubon hiding inside a periscope in a Parisian museum anticipating some horrible events that are supposed to happen at midnight. The story is narrated by him in flash back. Casaubon and two of his friends, Belbo and Diotallevi, work as editors for a vanity publishing firm that caters to authors who want to publish their manuscripts by paying. After encountering countless manuscripts about several conspiracy theories, they decide to frame one of their own as a joke. Helping them is Belbo’s personal computer Abulafia that has a program which rearranges text to create new connections. The conspiracy theory they develop named The Plan is about Knights Templar’s secret plan to take over the world by 1944. They comb several manuscripts, combine, arrange and rearrange all known facts and form an irrefutable theory about a secret weapon for which the whole of Europe- magicians, alchemists, kings, knights, priests, engineers, scientists, rulers and writers, were searching for centuries. Slowly the story which they were framing for fun takes over their lives. On personal front they have troubles when they start to believe that The Plan is a real thing. All hell breaks loose when secret societies start to get involved in it thinking that finally they got what they were searching for centuries. 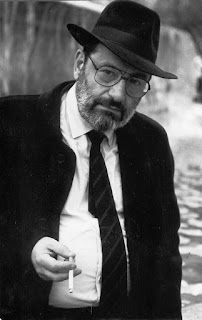 The novel that was released decades before Dan Brown’s Da Vinci Code, poses a serious problem to readers who are enchanted with conspiracy theories. What Eco has done in this novel is to construct a conspiracy theory by combining all major conspiracy theories about secret societies and spoof the human tendency to complicate things. He establishes that erroneously connecting facts can make convincing fiction. Most of the secret societies known in Europe make an entry in the story- The Knights Templar, The Rosicrucians, Freemasons, Elders of Zion, Assassins, Jesuits… all contributing in making of The Plan. Several historical figures are also mentioned in connection with The Plan, from Napoleon to Francis Bacon and from Shakespeare to Hitler.  Several critics have called Foucault’s Pendulum as ‘Thinking person’s Dan Brown’. But Eco maintains that Dan Brown is one of the characters of his novel- someone who feeds on conspiracy theories.
A word of caution to those who plans to read this book. It is a tough path to take. The novel is ambiguous in many parts, crammed with lot of information and several passages require an additional reading of history. If you are hell bent on knowing about every secret societies, mysterious persons and happenings described in the book, it is going to be a tough task. I would ask not to go that much deep. Just go on reading and even if you find that things are getting complicated, ideas are going above your head, keep on reading. Give more emphasize on identifying with the turmoil characters than getting to discover every nuances of the story. That way the book will be more delightful.
Labels: books, Umberto Eco
Email ThisBlogThis!Share to TwitterShare to FacebookShare to Pinterest
Posted by Harish P I at 8:17 PM