Kahaani and The State Of Bollywood 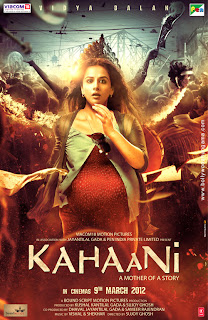 Sunday I watched this delightful Hindi movie called Kahaani. The best thing about Kahaani is that it had a kahaani (story), something very rarely seen in mainstream Hindi movies these days. The second best thing is that the story is told in a technically competent way in a brisk pace with tight editing and without any loose threads hanging (as far as I could notice). Third best thing is the casting that is excellent. From the lead character of Vidya Balan to the minor characters, all are convincing. From last few years more such movies are being made and most importantly watched. We had movies like Bheja Fry, Tere Bin Laden, Udaan and DevD that were artistically and technically competent and at the same time appealing to common people.
If we observe the kind of movies that are made in Hindi, one thing that strikes is the extremes. On one side such small movies like Kahaani are being made and on other side we can see established movie directors and stars, sans a few like Bhansaali, Rajkumar Hirani or Aamir Khan going the commercial way spending huge amount for set piece actions, foreign locales, songs and dances. While the former turn out to be the delight of critics,  latter gets blasted by them. Still many of these movies go on to become huge money grosser making the same critics to swallow their words. The latest bench mark is Rs 100 crores, set in the style of 100 million line in Hollywood. In last few years many movies crossed this mark like Dabaang, Bodyguard, Ghajini, Singham and Ra-01 most of them hated by critics.  Long back such a thing had happened when the biggest money spinner of all times, Sholay was released. Critics predicted that the movie will be a colossal failure, but audience thought otherwise. But the recent trend seems to be the result of another reason- the entry of the concept of marketing into the movie world.
Previously when a movie was released, the producers were the most anxious people because they had more to lose. The biggest chunk of investment is made by them and till the movie recovers the entire cost and makes profit, they have sleepless night. Now most of the movies are released by corporate, who hire specialized experts to see that all or at least most of the money is recovered before the movie hits the scene. This is done by selling the audio, overseas and satellite rights and by product placement in movies. Also maximum numbers of prints are distributed so that maximum profit can be squeezed out before any bad mouth publicity can affect the run. Then pressure is on releasers who use the promotion campaigns made along with producers to create the hype and sell it to exhibitors. Exhibitors take more risk in most of the cases, but the advent of multiplexes has reduced this also. At a time all the movies released are exhibited (with premium ticket rates) and the loss gets offset in most of the cases. So this is a win- win situation for all.
So the situation is like this. Whatever they make in the name of a movie, all involved are in profit. By the time the initial madness sets down and revelation comes to the movie goers that they have wasted their money on absolutely forgettable stuff, the profits are made. And this is the story behind many of the 100 crore movies made these days.
But there is a plus side also to this trend. As the risk is less, if a director is interested in making a good movie, he has all the opportunity to go on with it. Production houses will back novel ideas if the budget is in control, because they can make a small profit even if the movie runs for a week. So we also have a pack of young directors, mad about good movies, making what they like with minimum interference from the people financing the movie.  This is one reason why small, creative ventures like Kahaani are made these days.
Labels: Bheja Fry, DevD, kahaani, movie, Sholay, Singham, trends, Udaan, vidya balan
Email ThisBlogThis!Share to TwitterShare to FacebookShare to Pinterest
Posted by Harish P I at 7:22 PM