Book Review: The Temple of Avinasi by Ayush Pathak

Fantasy is a genre that has tasted some major success in recent times- in books and in movies. Writers around the globe are experimenting by mixing fantasy with different other genres creating unique cocktails- thriller fantasy, mystery fantasy, romantic fantasy, historical fantasy (ever heard of Abraham Lincoln, The Vampire Slayer?), sci-fi fantasy, mythological fantasy and even erotic fantasy. The major consumers of the genre are teens and young adults. The plots and plot structures of these books and their narrative styles are generally made to suite their interests with all major characters being teen agers. Following its tremendous success in international level, several Indian authors too are trying to emulate them with varied results. Recent path breaking success of Amish Tripathi in creating a trilogy about an Indian mythological hero has encouraged many new writers to take inspiration from Indian mythology in writing fantasies. The Temple of Avinasi: The Legend of the Kalki written by Ayush Pathak is one such effort.

Angel is a boy living in the Valley with his guardian Shri and his close companions are Alisha and Sam. During one of their escapades into the nearby forest, the trio meets with a talking Yethi. Angel realizes he is a not a normal kid and has some extraordinary powers. His displaying these powers causes a group of mysterious people to invade the valley and attack him and those dear to him. With the help of the Yethi, Angel escapes to the Temple of Avinasi, a brotherhood made of several tribes under the leadership of Devs to prevent Nishachars from wreaking havoc among Nashwars, the humans. He learns that he is a Dev and his destiny is to fulfill an old prophesy by being the last Avatar, Lord Kalki and annihilate the Dark Avatar. But he never realize that in doing so he will have to confront the secrets of his past and make a choice that can alter his existence for ever.

The best thing about this book is that, though it bases itself in the Indian mythological stories about Dasavathar, the writer never tries to mold his story on those lines. He uses certain plot points from them to tell a totally different story, set in present times. To take inspiration from epics and creating a modern fantasy out of it, I feel is an impressive feat by itself. The language in which the story is told is very simple, making it easy for even readers who are not aware of Indian myths to comprehend and appreciate the happenings very clearly. The book is a bit long, just less than 400 pages and takes some time to read. But there is no complaint as the pacing of the story is pretty fast and the book is quite entertaining with a lot of things happening. The descriptions of different worlds, different kinds of tribes and creatures inhabiting them are entertaining to read. The characterization is also adequate for the scope of the book. The climax is good and though it is the first part of a series, it feels like a standalone book. At the same time I felt like waiting to see how the story is going to turn in the forthcoming part.

I was not impressed with the cover. Design does not want me to pick this book from the lot. May be the excessive use of blue color did it for me. Another complaint that I have is that the book is too genre driven. Every twist in the story reminded me of some other book in the genre- from Harry Potter to Lord of the Rings to Star Wars. It feels like the author has made a check list of plot points after researching fantasy books and wrote the book after that. If you are really into fantasy novels, this book will not disappoint you. Others can use this book as a stepping stone if you want to start appreciating the genre.


The book was received as part of Reviewers Programme on The Tales Pensieve. 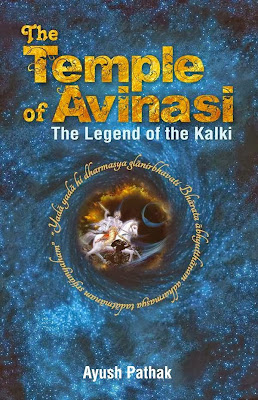 Labels: book, book reviews, books
Email ThisBlogThis!Share to TwitterShare to FacebookShare to Pinterest
Posted by Harish P I at 9:17 PM