Ramayana is one of the major literary achievements to come out of India. It has influenced and inspired generations of Indians and even Non-Indians. There are many works that are written inspired by Ramayana and several art forms- folklores, dance forms, paintings and sculptures, depict portions from Ramayana. Seeing the epic from different viewpoints, different sensibilities, different regions and different perspectives, most of these depictions vary very much from each other. But the basic purpose of writing Ramayana was to answer a question. Is there a perfect man (Purushothama) who demonstrates all the good qualities humans can possess?

So Ramayana was essentially a moral story that tried to show us how to lead a good life. Through his ideal hero Rama, Valmiki was trying to instruct us on living as a perfect son, brother, husband and a king. But due to the many revisionist retellings, we tend to put this factor into background and focus instead on historical or social contexts (like in the recent alternative history of Hindus) of the epic. Through his book series Ramayana: The Game of Life, Shubh Vilas tries to retell the epic. He was kind enough to send me a review copy of the first book in the series, Rise of The Sun Prince which is based on Balakaanta of Valmiki Ramayana.

The book is written based on Valmiki Ramayana, though some portions have the influence of Kamba Ramayana in it. It starts by telling the back story of the origins of Rama, one of the ten incarnations of Lord Vishnu. The situations that lead Lord Vishnu to take up human form, as the son of Raghuvanshi King and ruler of Ayodhya, Dasharatha are detailed, main one being the rise of Ravana, the demon king as a threat for the world. The story ark follows the birth of Rama, after Puthra Kameshtti Yagna is conducted by King Dasharatha, the education and upbringing, his journey to the forest with Sage Viswamitra, the killing of demons Subahu and the lot and ultimately his marrying Sita after breaking the magical bow of Shiva.

The retelling, as far as I could gather with my limited knowledge, is faithful to the scripture. The writer has used a narrative style that is contemporary. This will definitely help the new generation readers in identifying with the story. Also the writer has made it a point to relate the morals in the millennia old story to the crises that a modern person encounters in his day to day life. This, I feel is the major appeal of the book.

Abundance of foot notes made me remember the texts of Ramayana and Githa that I used to see inmy childhood. These foot notes can be a bit distracting if your concentration is on the story line. But they can be of use if you want to take away some life lessons from it. Initially I had some doubts about the story telling abilities of the author. The parts about Ravana especially were a bit dull. But once Viswamithra enters the scene asking Dasaratha to send Rama with him into the jungle, I was hooked. From then onwards the tempo was raising geometrically. And what a character study was that of Viswamithra’s..! It was some great writing, there.

Rise of The Sun Prince, the first book of the series Ramayana, the Game of Life is a retelling of Ramayana told in a way that will entice the readers of today’s world. A careful reading of this book is definitely rewarding. 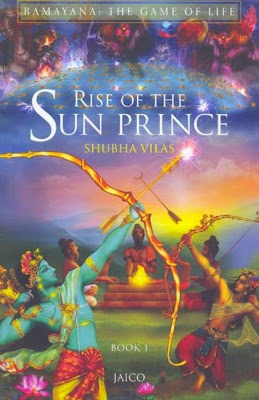 Labels: book, book reviews, books
Email ThisBlogThis!Share to TwitterShare to FacebookShare to Pinterest
Posted by Harish P I at 6:22 AM