Book Review: From Souk To Souk by Robin Ratchford 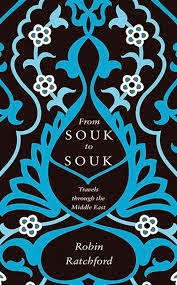 Middle East was and is one of the most important geographical areas from the beginning of history as we know it. It is the place were three major religions of the world- Judaism, Christianity and Islam originated. It was an integral part of trade routes that connected east to west- Silk Route and Spice Route, one through land and other via sea. Middle Eastern civilizations have contributed much to the modern world in different fields- astronomy, mathematics, sciences, language, culture, literature, arts and much
more. Several inventions like wheel and paper were made here. This region has affected the politics of different countries far away from it from time immemorial. Vasco de Gamma and Columbus started their expeditions as the sea route to East was totally under Arabs. In contemporary politics too Middle East and its oil reserves has a major role to play. There are several works that tries to bring the beauty and thought of Middle East to the outside world. The latest entrant is the travelogue From Souk to Souk by Robin Ratchford.

From Souk to Souk as its writer agrees, is not a chronological travelogue, or a journalistic reporting. In his own words:


...it weaves observations with perceptions and memories with imagination.

This book is a collection of his varied experiences in different Middle Eastern nations through several travels done to these places in different times, as early as 2001. He claims the interest to these nations started thanks to his childhood hobby of stamp collection. He has traveled as a tourist in most of the nations in the Gulf and even Afghanistan, which he claims is a part of the same culture though cartographers may differ. It starts with Turkey and ends in Jerusalem, a holy city of all the three monotheistic religions.

Unlike most of the other travelogues that I read before, this one, as I told earlier, does not have a definite pattern. It works as a compilation of perfectly standalone essays, which manages to show a complete picture when read together. The reader will not find any details of his journey or about his accommodation inside. Nor will you see any practical tips for those interested to visit these places, as is a norm in a standard travelogue. The writer is more interested in recounting his personal observations about the nation, its politics, people inhabiting it, its topography, architecture and how all this can give a historical perspective about the said nation. True to its title, he visits the market places (Souks) in all the places he visits and recounts his experiences there. Though you won't find cumbersome details about the wares they sell, the writer masterfully associate the state of its Souk to the state of the nation he is writing about.

The empathy he shares with the natives of the places that he visits and the keenness with which he takes part in all the experiences with an intention to make the most of them struck a chord with me. Also commendable is the absence of any baggage of prejudice in what he brings to the table. Read the travelogue From Souk To Souk to realize that men around the globe may look or speak differently, but the core is same.