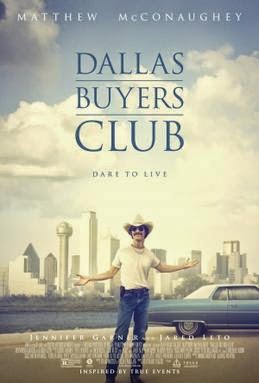 Biopics are always my favorites, be it the tragically funny Ed Wood or the powerful cop drama Serpico. It is fascinating to realize that at least some parts of the characters enfolding on the screen are real, however outrageous or out of world they may look . So when I chose to watch Dallas Buyers Club, the reason was obvious. An added bonus was the Oscar win by two of its main actors- Matthew MacConaughey and Jared Leto.

Dallas Buyers Club is loosely based on the life of Ron Woodroof, an electrician diagnosed with AIDS in 1985 and told by doctors that he has just 30 more days to live. He is subsequently ostracized by his family and friends and loose his job. The only medicine approved and endorsed by FDA in USA for testing is AZT, which Woodroof manages to acquire by bribing a hospital worker. His condition turns critical due to the side effects of AZT combined with his drug abuse. A Doctor whose licence is cancelled in US treats him with alternative medicines in Mexico and his condition betters. He decides to make a living by smuggling and selling these drugs in US to fellow sufferers. Though a homophobic, he decides to partner with an HIV positive transsexual woman Rayon, as Rayon has better access to AIDS patients and establish Dallas Buyers Club, a cheaper alternative to AIDS patients. FDA finds out about this and is desperate to close his shop. Woodroof outlives the predictions about his death by seven years.

One thing that is special about this movie is the acting by the leads which gave them their much deserved Academy Awards. I never figured MacConaughey to be an actor with such versatility. He portrays Woodroof with much integrity and passion. There are two faces to his character- what he is when the movie starts and what he become by the end. The streak of compassion, fellowship and humanity that was hidden in him slowly exposes itself to the audiences and MacConaughey gives an impression that even he is not aware of it. He plays Woodroof as an outrageous, selfish addict (to drugs and to life) throughout the movie, but even when he display madness on screen there are some moments where a small flick of expression, a rather mellow sadness in his deep eyes, a minute gesture that betrays his transformation to the viewer. It is a beautiful performance to say the least. And then the role of Rayon played by fabulously by Jared Leto... I would just disclose that the only factor that betters MacConaughey's acting in this movie is the performance by Leto.

Dallas Buyers Club documents the scene of AIDS patients and their treatment in US during 80's. It shows the horrors confronted by the patients and the hurdles encountered by the Doctors who wanted to make a change. But more than that it is the story of a man with a never say die attitude, who learns the beauty of life that was never visible to him before he was handed over his death sentence.

Labels: movie, movies
Email ThisBlogThis!Share to TwitterShare to FacebookShare to Pinterest
Posted by Harish P I at 9:56 PM