Remember 300, the movie that had the visual style of a graphic novel (because it was adapted from a graphic novel), great score, lot of violence and in which a bunch of models with six pack abs masquerading as Spartans kicking on the butt of an above average sized Persian king with an above average size ego, eventually killing all of themselves in the process? Seems all of that awesomeness was just the tip of the iceberg. They made a follow up movie titled 300: Rise of an Empire, with the same style, same score and spilling a lot more gallons of blood. In 300, spilled blood looked like tomato ketchup and in the follow up it resembles watermelon juice. 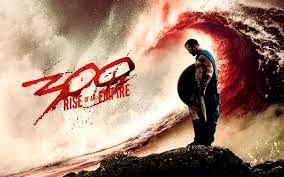 The events in this film happens parallel to the happenings of the original. Now I have a confusion what to call it..! If the story happens before the original, follow up is called a prequel. If it happens after the original it is a sequel. Some movie linguist please help me out here.

The story is narrated by Leonidas' wife, Gorgo. She tells how an Athenian soldier, Themistocles kills Persian emperor Darius 1 and end the first Persian invasion in the battle of Marathon. Darius' son Xerxes is advised by him before dying not to continue the war. Artemisia, the Greek naval commander of Persia manipulates Xerxes and makes him a God King and prepares to fight the Greeks. On one side Xerxes' army, who were marching towards Thermopylae is fended off by Leonidas and 300 Spartans. On other side Themistocles fights the Persian navy in Aegean sea. Though he manages to inflict some serious damage to Persian ships, the ruthless tactics of Artemisia causes his heavy loss eventually. He negotiate with Gorgo and implores her to avenge Leonidas' death. And thus starts a war were the entire Greek states join to fight the mighty Persians.

The second installation is definitely not an improvement on first. All the ingredients are the same. The plot is confused and those who are not familiar with history will fumble to grasp it. Acting is so- so. Gerard Butler, though appearing in some flashbacks and a in a disappointing cameo as a severed head is heavily missed. Eva Green is competent as Artemisia. The gore and nudity is appalling some times. Dialogues lack the fiery edge.

In spite of these hiccups I loved the movie. It was watchable and it made me to do some research (on Wiki) on the backstory of Persian invasion of Greece. It was an important event, because if the outcome was any different, the Western civilization would be much different from what it is now. If Persia succeeded in invading Greek, history would be standing head over heels.
Labels: movie, movies
Email ThisBlogThis!Share to TwitterShare to FacebookShare to Pinterest
Posted by Harish P I at 9:09 PM