Book Review: Autobiography of a Mad Nation by Sreeram Karri

I was born in a mentally retarded country.

Sreeram Karri's explosive novel, Autobiography of a Mad Nation starts with this sentence. It gives the feel that this is going to be another long rant about all that is wrong with contemporary India. And it is, in a way. But on careful reading of the book we find that, what shines beneath is pure love for the nation. The novel, published by Fingerprint is longlisted for MAN Asian Literary Prize.

The novel starts with a rant by a young aspiring writer, Vikrant in death gallows awaiting President's mercy. Retired CBI chief Vidyasagar sets forth to find the truth by doing an unofficial investigation after a request from the President. He discovers that it is not a one off incident and there is more than what meets the eye to be discovered. A group of influential men are running manipulations behind the screens an trying to alter the course of Indian history. Is it for good or for bad?

Autobiography of a mad nation is a murder mystery in the outset. At the same time it serves as a look back into the bizarre and insane past of our nation. On one side a fast paced story unfolds parallel to the important historical incidents fom Indira Gandhi's emergency to Gujarat riots, while on the other we are served with some honest social an political observations that need not be on the politically correct realm.

The novel has a nonlinear narrative structure which unfolds in two paths- one is a first person narration of the fictional novel written by Vikrant and second is the actual story of the murders, coverup and investigation told mostly in flashbacks. The narration is stylish and intense. There is no doubt that Sriram Karri is a gifted storyteller wih enough honest passion to make the reader careful for his story and even gives it a serious thought while enjoying it.

The author should be appreciated for his guts to criticise the harmful elements of society without any political or religious bias. Many of the readers will surely be offended by the courage of Karri to call a spade, a spade. One complaint that I have to make is about the solution that the novel hints. I feel it may be ineffective, even extremely dangerous in long run. Yet I enjoyed reading this well crafted, powerful novel about contemporary India and would recommend it to anyone who feels at any point o time that they're living in an insane nation. 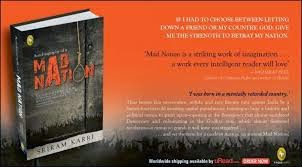