The Veteran by Forsyth: Quick Shorts

I have found Frederick Forsyth novels consistently enjoyable. The deep research that evidently went behind each of his books gives the stories much credibility. Also the way he mixes facts and fiction is commendable. The background information-trivia- that he provide for the readers in many novels are fascinating. That was the reason when I saw that The Veteran was a collection of five novellas, I was a bit turned off. I was worried that the short story/novella format may not suit Forsyth's elaborate style of narrating stories.

The Veteran, the opening story is a police procedural. It starts with the mugging and killing of an unidentified man and the police arresting two criminals, thanks to a sound witness and solid proofs. But a very successful attorney appears for the convicts and causes their acquittal, only to ensure that natural justice prevail. Breakneck speed is the only thing that keeps our interest in the story. The twist ending was predictable, but satisfying.

Art of The Matter is a heist story set in an auction house that deals with paintings. When he loses his job due to a fraud committed by his superior, an ex-employee decides to take revenge by teaming up with an out of work actor, another victim of fraud. This one is my favorite due to the elaborate setting of the plot and detailing. Suspense element does not play much of a role.

In the third story, titled The Miracle, an American tourist couple in Sienna meet a stranger who tell them a mesmerizing story of a miracle that happened right there during the Second World War. Though in the end the story turns out much simple than anticipated, that makes the twist more enjoyable. Point to note is the mastery displayed in narrating the story. I could visualize the entire happening.

In the fourth story, titled The Citizen, the author really falters. It is about international drug trafficking through commercial airlines. The plot tries to be too clever and the climax tries to be manipulative. This resulted in an unsatisfactory ending.

The fifth novella, Whispering Wind is the longest of all. Here an American scout in Montana loves a Cheyenne girl in 1850s, but she gets married to someone in her community. The man wakes up in the next century and after facing much hardships, gets successful in getting back the love of his life. The narration of this story is top notch and that helped me to adjust with the sudden shift to fantasy.

Forsyth is successful in assembling a bunch of stories displaying an astonishing range. Plotting is great. Pacing is frantic to say the least. Narration is fantastic. The forced twist endings doesn't work in some stories. Characterization is totally lacking. Overall, keep the expectations a bit low and here is your perfect holiday read. 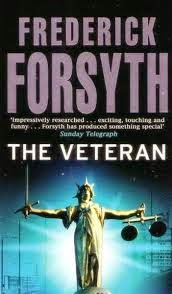 Labels: book, books, mystery, short stories, thriller
Email ThisBlogThis!Share to TwitterShare to FacebookShare to Pinterest
Posted by Harish P I at 6:43 AM