One Straw Revolution: Zen & the Art of Organic Farming

In recent times there is a surge in the number of middle class people cultivating vegetables in Kerala. The reason- reports of widespread use of harmful fertilizers and pesticides in vegetables available in market.  If recent reports are to be believed, everything- food grains, pulses, vegetables, milk, poultry, fish and meat- comes to us adulterated. The frightening result is that people from Kerala are increasingly prone to severe lifestyle diseases. All the while, government has no efficient system to identify this malpractice and curb it. Organic vegetables are suddenly becoming a rage in the market, but the sellers are charging premium rates for the products. One visible improvement is that people are slowly getting warmed up to the idea of cultivating at-least some of the essential food products in whatever space available with them.

Now, in our industries we have this fetish for trying out Japanese innovations- Poke-yoke, Kaizen, Kanban, 5S and a lot many systems that are the pillars of Japanese efficiency. We use them injudiciously with varying success results.  It was with this background that I read this little book titled One Straw Revolution by Masanobu Fukuoka, a Japanese farmer who invented the clever philosophy of Do-Nothing farming. This is a book that I feel each one of us should definitely give a try. Don’t panic by seeing its title. The book is not a text book on organic farming. It is one part autobiography and one part vision statement or I would prefer to say philosophy of Fukuoka. It is a rather simple and straight forward account.

Instead of using chemicals and large scale machinery equipment, Fukuoka claims that working in tandem with nature can achieve better results and keep the land perennially fertile. He stresses the importance of using common sense, studying the way things grow in nature and copying it to achieve results. Also Fukuoka places great importance in ethics of agriculture- food production should never be a business. The primary reason for cultivation should be self- consumption and then surplus can be sold outside.  The philosophy of Fukuoka is to make things simple by avoiding any unnecessary complications. He ridicules the agricultural scientists and engineers who visit his farm, which gives same level of production as that of neighboring farms which make use of machinery and complicated procedures.

In Fukuoka’s vision, a farmer should be a philosopher, a monk and a poet. I loved his argument that organic food should cost way less than regular products because the manufacturing cost is considerably low. He details his methodology in this book, but cautions that the reader should not just copy his method, but should adopt and fine tune it according to the geography and the crop. For this deep observation of nature and several trials may be necessary. He warns the reader not to be fooled by the wording Do-Nothing farming. It takes some time for the soil, inflicted by the chemical abuse to regain its fertility.  He says that we are unnecessarily straining ourselves by taking up the work that nature can do much more efficiently than us. Finding out such wastages can really help overworked farmer to spare some valuable time to sit back and relax, enjoy life’s little pleasures and even be a bit lazy! 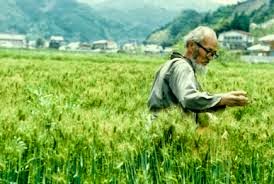 Labels: agriculture, book, books, current affairs, japan, kerala
Email ThisBlogThis!Share to TwitterShare to FacebookShare to Pinterest
Posted by Harish P I at 6:52 AM