As per Anuj Dhar, the biggest cover-up that occurred in post-independence India is the truth behind the alleged death of Subhas Chandra Bose in a plane crash in Taiwan. He and his colleagues are relentlessly following up and even fighting sometimes with Indian and even some international governments for an unbiased final investigation and acknowledgment of truth behind the mystery along with the declassification of several confidential documents with the government so that the ambiguity among the mind of Indians about the fate of one of the biggest patriots is cleared. India’s Biggest Cover Up is a work that covers the history and most of Dhar’s research work about the mystery.

The book gives a chronological narrative of the mystery. It starts with the official account about the plane crash that allegedly resulted in the death of the founder of INA and Forward Bloc, Netaji Subhas Chandra Bose. Thereupon it describes several Government investigations and their findings on the case. It also deals with many related stories that compound the mysteries surrounding Bose like the treasure of INA, which Dhar suspects was looted by some former INA people themselves. There are also the details of sightings of Bose included- like the Shaulmari baba or the more probable candidate Bhagawanji.

The book questions the official line endorsed by each of the Indian governments till date and suspects foul play by vested interests in covering up the facts wantedly. Dhar also suspect foul play in keeping many documents related to Bose mystery as classified and so top secret that if leaked they have the potential to compromise national security. Dhar has pointed out several inconsistencies and serious errors in the investigations by various commissions that were neglected while concluding to make the end result fall in line with the official version.

To the credit of the author, he has presented his case really well and without any loop holes. Inclusion of several photographs and images of declassified documents and commission reports shows the amount of painstaking research gone to the writing of this book. Another positive factor that I noted while reading this book is that the author has taken good care to avoid bias from his side. He has substantiated most of his statements, doubts and questions with proof and has abstained from making any emotional outbursts.

I would recommend this book for every Indian whatever may be their take on the issue. I believe this book will make us part of the struggle to make the truth, whatever it may be, come out from the hiding in a way that gives no scope for a doubt. 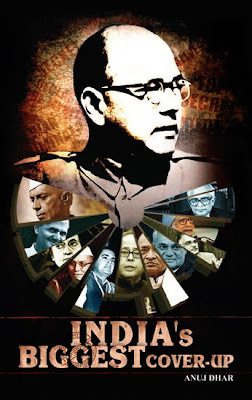 Labels: book, books, India
Email ThisBlogThis!Share to TwitterShare to FacebookShare to Pinterest
Posted by Harish P I at 3:03 AM