The Counselor and other movies: Flop Show

Last week I happened to watch lot of movies compared to my normal consumption rate. All of them had the potential to be good, sensational or even excellent as the talent associated with them had produced excellent work before. All movies had some really interesting thought process behind them, which was the basic reason why people cared to make them first of all, but invariably all of them failed in the execution. So when I say I do not like these movies I do not demean them or the people associated with them. I really hope they make something better next time.

Mannar Mathai Speaking 2: Let’s start with the bottom of the barrel. The only thing this one succeeds is in destroying all good that were the previous movies of the series. There were some laughs in the beginning, in-fact more or less the same ones for which we laughed decades back while watching the previous installments and then it was all chaos…

Konthayum Poonoolum: Well, this one had an interesting concept- an episodic horror movie. The cast was good, technical aspects were brilliant and the concept on paper should have made it a safe bet, at a time when experimental movies are striking gold in Kerala. I believe the problem was with editing. The plot was all around and the way in which the stories were tied together made it all the more absurd. Nothing much made sense. The CD that I had was faulty, fortunately I could not watch the last half an hour of it and when I told it to the shopkeeper later, she offered replacement. I opted for cash back instead.

Samsaaram Aarogyathinu Hanaikaram: I watched the Tamil version and I really forgot the name of it. I can Google it, but why waste time, considering that I already lost some by trying to watch it. This too had an interesting concept- about a disease that renders an entire village mute for days. They tried to make it a comedy, emotional, political, social satire with romantic undertones of a three-way love. There is a dose of female empowerment thrown in somewhere. Result is a big black HOLE.

Kallathuppakki: Ok, I doubt any of you have heard of it. If you haven’t, you haven’t lost anything. How I wish we were in same pedestal on this issue..!

Maan Karate: This one starred that guy from Varuthappadatha Valibar Sangam, the movie that surprised me by its quick wit. Maan Karate started promisingly, was progressing enthusiastically, only to demolish in the end the whole of its potential by just sitting on all the good it could have done.  Starting as a fantasy, it quickly goes into hero-worship mode and never recovers. Problem is the guy has not yet reached there himself nor does the movie do anything to establish him there.

The Counselor: Great crew, talented cast, stylish production, good acting, wonderful dialogue- almost all dialogues in this one are quotable (I don’t know about the Spanish ones as the DVD didn’t had subtitles for them. I presume they are also good by the satisfied look of extras appearing to mouth them), and no point in the whole movie. It just goes on and on, with most of the scenes involving several of the characters giving their two bit of advice to The Counselor, the protagonist. I don’t know why should I care, when apparently even the guy doesn’t follow any of them and lands in a soup. I don’t even know how he gets into the trouble as no much detail are given in the movie. The last scene has a piece of dialogue that goes something like, “I think you’ve told me more than I wish to know”.  That dialogue sums up the feeling after watching this extravagance. The joke is that slide they display at the end of the movie which says, “The making and authorized distribution of this movie supported over 13,000 jobs…” It is satisfying to know that something good comes out of every catastrophe. 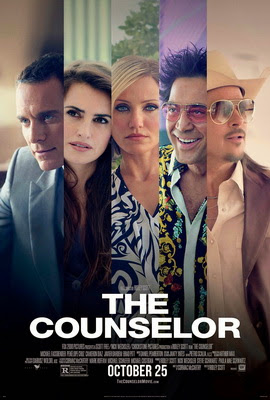 Labels: movie, movies
Email ThisBlogThis!Share to TwitterShare to FacebookShare to Pinterest
Posted by Harish P I at 1:20 PM