There are many books and movies that tell a story from a loser’s perspective. There are many characters in literature and movies to whom nothing good ever seem to happen and if anything happens also, it never brings the desired results in their lives. I am not a sucker for such characters as they tend to be depressive. One example I remember is Joseph Heller’s infinitely boring novel Something Happened. When I read the blurb of the book The Poor Man’s Guide to Suicide written by Andrew H Armacost, I was apprehensive as this one too seemed to tell the story of a loser. But then I ended up reading it anyway. Let us see how it fares.

Wesley Weimer is having the worst period of his life. Nothing seems to be working out for him. Being a two times divorcee, a major amount of his income goes in providing child support for his kids from his failed marriages. Professionally too, it seems he will never reach anywhere, he is a prison guard working in graveyard shift. Socially he is a misfit as his love life seems elusive and his only best friend gives him hell of an inferiority complex. Finally the pressure becomes unbearable and he decides to end his life. He arranges the help of a convicted prisoner for that. But from then onwards his life turns for good.

The best thing about this book is that we never cease to relate to the protagonist even when he does things that demonstrate his fallacies. Even when he demonstrate his mental complexes, his narrative style and his deep understanding of things happening to him and to others, make us realize that this guy is not as shallow as he makes us and himself believe. This is one factor that makes his transformation towards the end totally believable. The whole novel is more of a long character study of this individual, our protagonist. Occasional humor helps a lot.

On the negative side, every bad thing that plagues “Loser Literature,” as I would like to term this genre shows in this book too. The self-pity and self-victimization that the protagonist displays tends to go overboard in many places. The narrative becomes a bit depressing and dry sometimes. Still I will say The Poor Man’s Guide to Suicide is worthy of a read thanks to its protagonist, who despite not being likeable in conventional sense, makes an interesting three dimensional entity. 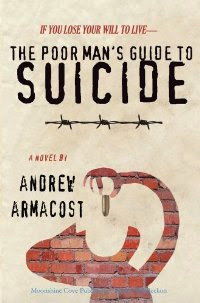 Labels: book, book review, books
Email ThisBlogThis!Share to TwitterShare to FacebookShare to Pinterest
Posted by Harish P I at 1:45 AM