Life of Brian: A Multilayered Comedy

Years back, in a book by Nityachaitanyayati, I happened to read about this comedy movie called Life of Brian. His description of the movie was so comic that whenever I read that short piece I ended up giggling uncontrollably. Last day I saw the actual movie. It is a movie by the famous team of British comedians called Monty Python. The movie came in 1979 and even decades later, is as fresh as new. It is a religious-political satire happening in Jerusalem parallel to the life of Jesus Christ. The movie was highly acclaimed and a commercial success, but was banned in many countries due to the religious overtones.

Brian Cohen is born on the same day as Jesus, in fact in a cow shed very near to the one in which Jesus was born. The three wise men worship him by mistake and grab back the costly things presented to his mother when they realize their mistake. Brian grows up to be a man who resents Roman occupation. He tries to do his bit for the nation but is crest fallen by seeing the internal politics among different fractions of Jews. While running from a botched up attempt to kidnap the daughter of Pilates, crowd mistakes him for Messiah and follows him, much to his irritation. His life runs parallel to that of Jesus and ends on a cross, but in a more positive way.

The movie never gives rest to the viewer’s laughing muscles for even a second because gags keep coming one after the other throughout the running time. Like typical British humor, comedy in Life of Brian is very slapstick in nature, with too much exaggeration and repetition. Its crudeness and political incorrectness may put off many viewers. At the same time, to a thinking viewer, who can look above the buffoonery, the movie is a treasure trove. It raises several questions regarding true nature of beliefs, politics, conduct in public and a society that create a Messiah when it need.

I will heartily recommend Life of Brian, because I believe it will be influential to one and all if we have  a state of mind to look above obvious. 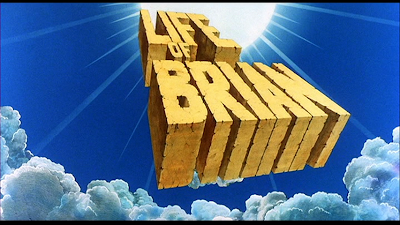 Labels: movie, movies
Email ThisBlogThis!Share to TwitterShare to FacebookShare to Pinterest
Posted by Harish P I at 5:12 AM