Book Review: My Journey by A P J Abdul Kalam

First things first, let me express my gratitude to Rupa Publications for the review copy of My journey, Transforming Dreams Into Actions by A P J Abdul Kalam. This is probably the best book I ever got for reviewing. The writer is someone who does not require any formal introduction. Any Indian living anywhere on the globe will be well acquainted with his marvellous accomplishments in various fields. He is one of the pioneers responsible in leading India into the Space Age and raising the nation to an atomic super power. He proved that Indian presidency is not a rubber stamp post. He inspired a generation of youth with his words, actions and books.

In My Journey, Dr Kalam takes a look back fondly to his past and shares with readers some events from his life that has contributed to his growth. But this cannot be called as an autobiography, he has written a detailed one already. This book is more about his aspirations and dreams. It is about the people who guided and inspired him into a successful future. The book starts in Rameswaram, a small coastal temple town in Tamil Nadu where Kalam was born as the son of Jainulabdeen and Ashiamma. His father was a religious man, who imparted in Kalam a mind that is spiritual and tolerant to the beliefs of others. He was a boat owner and also an imam. Kalam recounts how his father's calm demeanor was instrumental in inculcating good principles in his mind. He goes on to recount his first job, as a newspaper delivery boy, thereby contributing to the meagre income of his family along with continuing his studies.

Then he goes on to record several anecdotes about many persons who contributed to his life- his cousin and later brother in law, who answered his queries about nature in his childhood and later guided him to face life, his mother who taught him about sacrifice and kindness, his sister who stood behind him as a pillar of support in times of trouble, his first mentor of his career Dr Vikram Sarabhai and many others. There is a chapter dedicated to the books that influenced him, which as a book lover, I appreciate. He also tells about testing times of his career, like when he was unable to become a pilot which was his dream career or when his lab was destroyed in an explosion rendering him and a colleague injured. But all these anecdotes inspire readers never to abandon their dreams and tread on with life, constantly improving it.

My Journey is a small book, just short of 150 pages, but is an inspiring read. It makes us aware that lessons from life and improving is an essential part of transforming our dreams into results. My Journey is a must read. 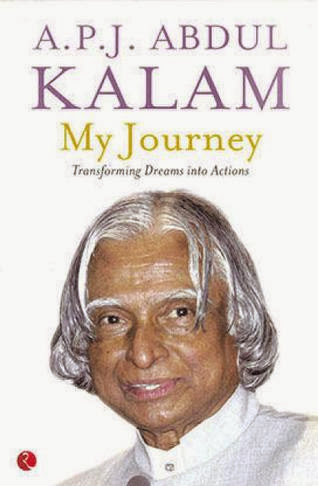