When I read the back cover of the book The Guardian Angels by Rohit Gore which I received to review a few days back, I remembered the classic Malayalam novel by writer M Mukundan, Adithyanum Radhayum Mattu Chilarum (Adityan, Radha and Others). It was the story of a unique relationship shared between rich Adityan and Radha, a middle class girl. In case of The Guardian Angels, the name of the protagonists are same and even their background is strikingly similar to the Malayalam novel. Even some elements of the plot like their reluctance to tag their relationship according to the accepted norms of society appears in The Guardian Angels. But the similarity ends there. While Mukundan's two decade old novel is a tightly crafted and multi layered masterpiece, told in non linear narrative, The Guardian Angels remains a run off the mill conventional romantic story, well narrated with lot of emotions.

The Guardian Angels tell the story of Aditya, son of rich industrialist parents and Radha, daughter of a trade union activist. We follow their life story from their first meeting during teenage when Radha save Adi from bullies troubling him to the time they turn to their thirties. We follow their troubles, ambitions, victories, failures and the times when their paths entangle changing them for good every time. What stops them from being a couple is the vast social gap between them, Radha cannot identify her home in a huge sprawling bungalow named Sammriddhi which happens to be Adi's home and Adi cannot relate to the struggle Radha participate in as it invariably portrays his parent's empire as anti- people. They belong to parallel universes but cross their paths whenever one of them is in a peril, saving each other, till they recognise they are each other's guardian angels.

The best thing about The Guardian Angels is the characterization. While the two protagonists are portrayed as complex, three dimensional entities who matures believably as the time progress in the story, the writer has ensured that other minor characters too are given equal care in developing enough so that the reader remembers them and their influence in the twists in the plot. Some examples are Heena, sister of Adi and his parents. The narrative does not stand still anywhere. It flows with enough twists and turns to keep the reader engrossed throughout the 300 plus pages. At the same time none of them seemed to be forced making the flow natural and essential to the plot. I also liked the emphasise given to social causes in the story and making it an integral part of the plot.

The Guardian Angels by Rohit Gore is a very readable and interesting romantic novel with some great characters inhabiting it. I would recommend a try for all. 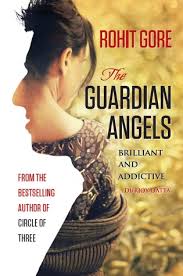 Labels: book, book review, books
Email ThisBlogThis!Share to TwitterShare to FacebookShare to Pinterest
Posted by Harish P I at 1:30 PM