Knots & Crosses is the first novel featuring Inspector Rebus that I read. It is also the first Rebus novel in the series by Scottish writer Ian Rankin. The series is much acclaimed and spans across some 17 books. I was just waiting to get my hands on the first book. Though the book is tagged as crime fiction or murder mystery, Ian Rankin had clarified that he had no intention to write one. Infact he never knew anything about crime novels. That contributes to the reading pleasure as the plot is refreshingly different from the standard fare available.

The story is set in Edinburgh, Scotland. When young girls are abducted and found murdered by a serial killer, a team is formed to nab the killer, of which John Rebus is also a part. Rebus is a longer in the department, aloof, chain smoker, hard drinker, womenizer and a divorcee. He is according to his boss, a good officer, but not the best. At the same time of killings he gets several mails with knots and crosses made of strings and match sticks along with messages that he cannot decipher. By the time he realize that these messages are clues about the murders and his mysterious past in army is far deeply involved with the murders than he thought, it was late. Will he be able to race against the ticking clock to prevent a looming personal disaster and nab the killer? Read the novel to know.

Knots & Crosses is a novel skillfully crafted with great style. Ian Rankin succeeds in baring the dark under belly of the tourist city of Edinburgh to the readers. The dark setting, looming terror and ominous atmosphere is captured realistically. Another master stroke is the characterization of John Rebus. He is not made a standard detective hero and has enough flaws and shades of grey around him to make him even a potential suspect in the minds of readers. The subplot involving his hypnotist brother also works as a wonderful layer on the main plot.

(Spoiler alert) As I told first, Rankin did not write this as a mystery novel. This is evident because Inspector Rebus does not actually detects the killer by himself! He turns out more to be a pawn in the game of Knots & Crosses played by a villain from his suppressed past. Also there is no scope in the story for the reader to do a guess work about the identity of the killer as he does not appear in the story before his is revealed as the killer. But these points in no way effects the thrill of the novel. After reading Knots & Crosses, I have decided to read all the successive Rebus mysteries. Hope they are as good... 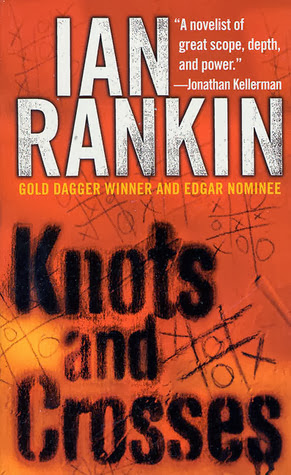