My favorite thriller novels are those which invests most of its length to built up the plot and then culminates in an unexpected climax. That is the reason why I love Dogs of War by Forsyth and The Runaway Jury by John Grisham. There are lot of thrillers by Indian novelists getting published these days and most of them that I read recently are reasonably well written. But the above said quality is lacking in all of them. Baramulla Bomber by Clark Prasad (pen name of Suraj Prasad) is an exception and I feel, by far it is the first Indian thriller novel which can truly compete with its international counterparts by not being a cheap imitation of them.

Baramulla Bomber is the first part (Eka) of Svastik Trilogy. It is tagged as a Science Fiction Espionage thriller. It follows the destiny of a young man, Mansur Haider from Kashmir who turns from an aspiring cricketer to the Baramulla Bomber. Something mysterious occurs in Shaksgam valley, POK. Someone has tested a weapon that works with the ancient technology from Vedas and Bible and has plans to use it to their end. Intelligence agencies throughout the world are trying to find the truth and everyone's search seems to end in finding Mansur. Indian government and Home Minister Agastya Rathore are facing a dual threat from two neighbouring nations and the only way out is to solve Kashmir issue, by hook or crook.

What makes Baramulla Bomber an exiting read is its multi faceted plot. It combines various subgenres of thriller and fuses them in a near perfect way. It has espionage, science fiction, mythology, religion, politics, technology, sports and even a UFO is thrown in somewhere there (the mystery of which the author has promised to resolve in one of the sequel). The plot is intriguing, fast paced and laden with twists thrown at the reader in regular intervals. It manages to keep the reader in suspense throughout as the motives of most of the characters are kept under wraps till almost to the end and it is difficult to determine where the loyalties of them lies while reading. Another positive about the novel is that it makes the reader interested in the different subjects covered in it- like mythology or archeoastronomy. The author makes sure that anything alien to readers that appears in the novel, and there is quiet a lot, is explained as convincingly as possible within the frame of fiction.

One minus point that I felt while reading the book was the absence of a really terrifying negative character. While the good characters are strong and portrayed quite convincingly, there is no one quite good to take them on. There are an identical twin pair of killers, but I never felt them menacing enough. Due to this, the climax also does not have that punch that such a novel really deserved. One more point that I have to make, not as a negative one, but rather a caution to readers is that the plot is a bit complicated and a bit confusing at times.

This book deserves a careful reading to savor and appreciate it fully.

This review appeared in bookchums.com 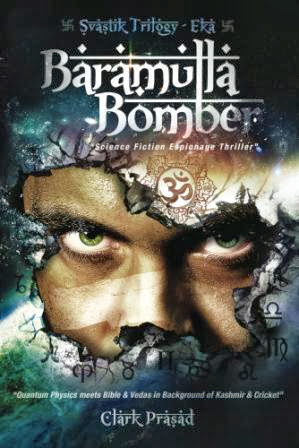 Labels: book review, books
Email ThisBlogThis!Share to TwitterShare to FacebookShare to Pinterest
Posted by Harish P I at 6:28 PM