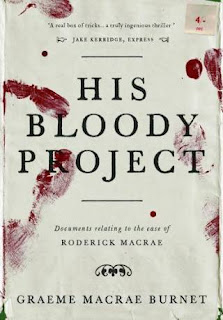 His Bloody Project is a novel by Graeme Macrea Burnet that was short listed for Man Booker prize, 2016. It is a historic crime novel based on the Scottish peasant life of 19th century. The novel narrates the story of a young man in late teens who end up murdering three persons in cold blood and is awaiting trial. His brutal act marks the title of the book.

The story is told as a collection of  documents acquired accidently by the author about a long forgotten crime. The main body of the novel is an account narrated by Roderic Macrea, a teenager imprisoned for murder, on the insistence of his lawyer. He writes about the events that lead to his desparate action. It also contains legal testimonies of the people of his village, a paper by a criminologist about his involvement in the case, post mortem report and trial report.

The novel maintains its intriguing style for its whole length and manages to keep the reader invested. It is successful in making us feel inside that the truth is not what that meets the eye and there is something more than what's revealed. It exploits the unreliable narrator technique. Instead of being just an account of a gruesome action, events that lead to it and the aftermath, it stands as a powerful character study of a young man who is in the midst of tremendous pressure due to his conflicts with the society and family.

The novel also is a study on inequalities, abuse of power and existence of class in society. Though the background of the story is the Scottish croft system, I felt that there is a universality to it. In some form or other, our society displays the same callousness and absence of empathy. We can observe the distrust between people of different social structures of our society.

His Bloody Project is a remarkable novel that mirrors the contemporary reality in the guise of historical crime fiction.

Labels: book, books, Man Booker
Email ThisBlogThis!Share to TwitterShare to FacebookShare to Pinterest
Posted by Harish P I at 12:34 AM