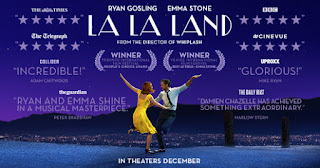 La La Land starts with a long musical and dance number in one shot happening on a highway. That and the retro looking opening titles clearly indicates that we're about to watch a movie that is intended as a tribute to the musicals of the Golden era of Hollywood. I've watched only very few of them. I can remember Gene Kelly starrer iconic movie, Singing in the Rain and old classic The Wizard of Oz. But being an Indian, I will never have an issue with appreciating Hollywood musicals. Most of our movies, be in any genre, feature song and dance sequences.

The title La La Land refers to a place that can exist only in fiction, in dreams. La La Land also denotes Los Angeles, the city of angels, of Hollywood, the place were dreams realise. This is a story about two dreamers, strugglers who falls in love in the city of angels. He is a pianist and a jazz puritan, who dreams of reviving the genre that is on its deathbed. She is an aspiring actress, working as a waitress and trying to audition for a dream role.

Their love is told through songs and dances that are beautifully staged in dream like setups. I used the word staged deliberately, because the movie, following closely the tradition of musicals from the bygone era, doesn't portray any semblance of realism in any shot. Yet the narration, instead of feeling made up and artificial, has a strong sincerity that force us to believe in them and their tribulations. The love story and the following breakup seems very genuine.

While watching it I was thinking that the movie looks and feels good, but the plot is pretty dated. But Damien Chazzelle, who shocked me with his astonishing drama Whiplash, had better plans. It is the climax that elevates it into a whole higher level. The climax, which was devoid of any dramatics was one of the best that I saw ever.

La La Land is a movie about movies, jazz, ambition, struggles, dreams and dancing in love. More importantly it is movie about the ability to let go of our great assets in order to achieve the passion of life.

Labels: movie, movies
Email ThisBlogThis!Share to TwitterShare to FacebookShare to Pinterest
Posted by Harish P I at 10:13 PM