From last few days the major news that shook the world of literature is the discovery that J K Rowling who is the bestselling author of Harry Potter series has written a detective mystery under a male pseudonym. Robert Galbraith's debut novel The Cuckoo's Calling received good reviews from critics and sold a few thousand copies. Then the news came that Galbraith was none other than J K Rowling. May be the reason for writing under a pseudonym was that her previous novel The Casual Vacancy was unfairly compared to Harry Potter books and suffered a bit from critics and fans. I would say this move is a master stroke from her which proved her versatility as a writer without the pressure of expectation from fans and also ensured good publicity for the novel. 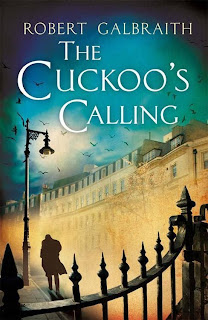 The Cuckoo's Calling introduces a new Private Investigator, Cormoran Strike into the already overcrowded universe of detectives. Cormoran Strike used to be a military intelligence man, who served in Afghanistan and had lost a leg in an explosion. Now he has set up an investigation agency without any success, is neck deep in debt and is homeless after getting himself kicked out of his girl friend's house. His fortune changes the day Robin, a temporary secretary assigned to him by a staffing agency enters his life. He bags the high profile case to investigate the death of a super model, Lula Landry, which the police has tagged as a sure incident of suicide. Beautiful Robin proves to be the resourceful sidekick indispensable in every detective story. What begins as a disparate attempt to generate the much needed cash flow for his firm, turns into an encounter with a maniac and ruthless killer.

J K Rowling weaves a plot that is rich with clues that are thrown at the reader which joins together at the climax like a solved jigsaw puzzle. Conventionally, the detectives are shown detached emotionally from the case they are investigating. Most of the times they don't even react to the social environment of the novel. But here the author successfully integrate the investigator with the society in which the crime occurs. In some parts of the novel we can deduce strong social commentary embedded to the plot were the writer satirize the class division that exist between rich and poor and even between different professions. The characters , even minor ones are given sufficient time and space to develop into three dimensional entities.

The narrative slows down a bit towards the middle and there are many repetitive descriptions about the murdered girl and other characters, as though the writer want to help readers who have attention deficiency syndrome, by stating obvious conclusions again and again. But once that phase is over, the novel picks up pace and terminates wonderfully. The novel never defies conventions of the genre, but the rich plotting, brisk narrative and wonderful characters makes The Cuckoo's Calling a fantastic
read.
Labels: book, books, Cormoran Strike, Harry Potter, J K Rowling
Email ThisBlogThis!Share to TwitterShare to FacebookShare to Pinterest
Posted by Harish P I at 9:12 PM