Micro and Andromeda Strain: The First and Last of Micheal Crichton

The one popular writer about whom I had heard a lot but had never read any works of was Michael Crichton. The first time I read his name was in a newspaper article at the time when Jurassic Park movie released and eventually after watching the movie I was mighty impressed. After that periodically movies released which were based on his novels- Rising Sun, Congo etc. Every book stores, secondhand book shops, libraries that I visited had at least a rack dedicated to his books. Still I never chanced on any one of his works. These were my thoughts when a couple of weeks back, I stood at the library browsing for my next read. I was standing near a stack of books authored by Crichton and finally decided on Micro, his last endeavor.

Only after grabbing the book and getting out of the library did I saw the writing credits shared by Richard Preston. A quick check in internet confirmed my worst fears. The novel was started by Michael Crichton but after his death completed by the other writer. I always had bad experiences with such books. The first two Robert Ludlum novels that I read were Deception Point and Ambler Warning. Both were trash and I was wondering how this guy achieved such success. Then I came to know they were incomplete manuscripts, published after his death using ghost writers. Chancellor Manuscript and Bourne Identity confirmed my theory, never to expect much from novels completed by someone else. After reading, I found that Micro is no exception. Micro is a novel written according to a formula. We have seen many times such concepts in books and movies. A bunch of youngsters get trapped in a foreign environment, and get killed one by one. The only way to get the best of this concept is to make the characters believable and interesting and make us cheer at them fighting against odds. In worst cases I had wished the lot of them get killed sooner and faster and end the misery- the reader's (viewer's in case of a movie) misery, I mean.

In Micro a bunch of researchers get shrunk to the size of millimeters and then get trapped in a rain forest, were they are killed one by one by insects and ants and such things. The group is assembled in such a way that every stereotype usually found in such stories are represented. And each one is equipped with a skill set that can help the group survive the horror, which invariably helps them at one point or other. But characters are so silly and situations so predictable, we never feel for any one and sometimes feel good that some of them gets dropped dead on the way. But the novel scores high on the description part. The scenery of the forest is described wonderfully throughout the novel, making us to experience the alien scenes, sounds and even smells of the insect world. I feel the novel was definitely written with a high profile movie in mind- an adult Honey I Shrunk The Kids.

Just to feel how an actual Michael Crichton novel feels, the next time I decided to read Andromeda Strain, which was the first hit novel of Crichton. Andromeda Strain is about a satellite that falls back to earth with a highly toxic and dangerous alien virus in it, which wipes out a whole town. A bunch of scientists, specially prepared for such an eventuality, assembles in an underground layer and tries to find out ways to contain the pathogen. Now this novel is a fine example of how with minimum setting and strong base of science a great techno thriller can be made. Of course the thrills are a bit dated when we read it now, still the characterization and thick plotting makes it a delightful read. 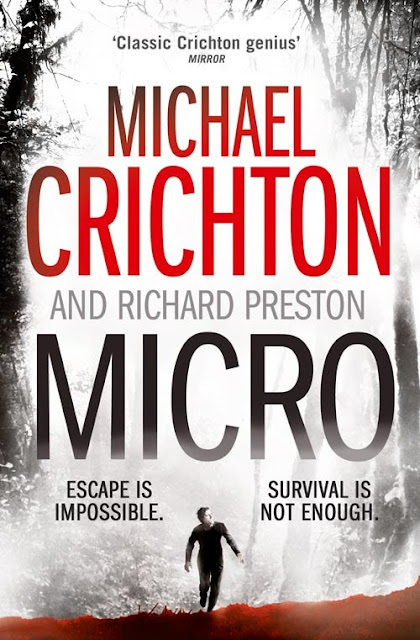 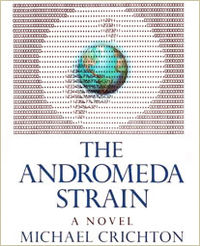 Labels: book, Micheal Crichton
Email ThisBlogThis!Share to TwitterShare to FacebookShare to Pinterest
Posted by Harish P I at 5:26 PM