Monsignor Quixote by Graham Greene: On Doubt and Belief

A Catholic priest named Quixote and a Communist mayor named Sancho goes on an adventurous trip on a battered car named Rocinante with a seemingly unlimited supply of wine. This is the one line plot of the short but poignant 1982 novel Monsignor Quixote by Graham Greene. You would have identified the characters by now if you are familiar with Cervantice' classic Don Quixote. Monsignor Quixote is a retelling of the masterpiece in post-Franco (a ruthless dictator) Spain. The novel discuss several topics like religion, politics, love and dictatorship.

Father Quixote, a simple priest who claims to be a descendant of the legendary Don Quixote, serving in a small village is unexpectedly promoted as a Monsignor when he helps a stranded Italian Bishop. His Bishop finds it surprising as he suspects Father Quixote of aiding Communists. At the same time the Communist Mayor of the town, who shares his surname with Sancho Panza, Don Quixote's sidekick, loses his position. Priest and Communist, both on good talking terms with each other decides to use this opportunity for an unplanned trip across the country in Quixote's old, withering car whom he fondly calls Rocinante. The novel describes their adventures on the way which faintly resembles those on Don Quixote's journey, the conversations between them about each others beliefs while downing bottles of wine and finally culminate in the tragic but expected (if you have read Don Quixote) climax.

By making his protagonists believers in two extreme ideologies, Graham Greene very cleverly sets up stage for some thought provoking discussions. At the same time it never gets serious or monotonous but gives the feel of a light banter between thick friends. There are many adventures thrown in between conversations where these friends get entangled with and get themselves pursued by law enforcers. The innocence of the lead character is endearing. There is a situation were he gets in for watching a movie titled Maiden's Prayer inspired by the title and it turns out to be a semi- porno film.

I believe the conversations in the novel between the priest and the communist are actually two voices inside the writer himself. If viewed closely we can find a man torn between beliefs and ideals. There is a nightmare that Father Quixote sees. On the third day after getting crucified, all are convinced that Christ is the Son of God beyond any doubt. There is no resurrection and all Roman generals and Jews gather to make Him ascend the throne. Father Quixote feels that if there is no doubt to anyone that Christ is the Messiah, religion becomes obsolete. Faith and belief survive by hanging on the narrow thread of doubt.

Monsignor Quixote is a novel that is entertaining and enriching simultaneously. Its short and beautifully carved, with characters whom we can identify with and studded with hilarious situational comedy. A definite must read. 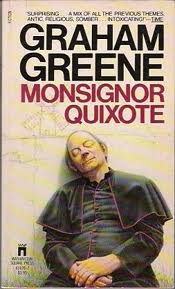 Labels: book, books
Email ThisBlogThis!Share to TwitterShare to FacebookShare to Pinterest
Posted by Harish P I at 10:21 PM