There is class fiction, there is mass (pop) fiction and there is pulp fiction. Though never acknowledged in main stream, cultural impact of pulp fiction on society is well studied by academics. Indian pulp fiction works are mostly written in regional languages, in a shoddy way and marketed chiefly for people in lower strata of society, emphasizing more on sleaze and gore than good story telling. This makes it difficult for urban youth to access and enjoy it. Piyush Jha is attempting to follow the conventions of the genre, but at the same time make it enjoyable for every class of readers through his second book Compass Box Killer. The book is published by Rupa.

Compass Box Killer is the story of a serial killer who leaves back a message in the area of crime about the identity of his next victim in (no points for guessing) an old, rusted compass box. The killings are planned so ingeniously that it is evident the killer is a man who is having in depth knowledge and technical expertise. To further add his difficulty, Inspector Virkar has to dodge intrusive media assaults, an unsupportive boss and some one powerful trying to sabotage his investigation. But when he goes deep into the investigation he find out the real motives behind the murders which points to an unsolved death of a young expatriate that happened years before. Read Compass Box Killer to find out if Virkar can solve the mystery of compass box messages and prevent more ruthless murders from happening.

It is interesting to check out how faithfully the writer follows the Pulp novel genre, how much he deviate and how effective it makes the novel. Sleaze and gore are two major and recurring elements of any pulp fiction. Here Piyush Jha scores a jackpot- there is sex related murder in the prologue itself. First chapter feature another murder and body count is taken to two. As the novel progress thanks to the serial killer plot many bodies fall. And also there is some intimacy shared between Virkar and the femme fatale Raashi Hunerwal. But the author makes sure that the detailing of these aspects in his novel never cross the border of vulgarity, unlike the regular ones of the genre. Another positive aspect that the writer has adopted is the relentless pace with lot of twists in the story. For pulp fictions this is a necessity because as they are produced cheap and are intended for quick consumption, a lot happen over a few pages. Compass Box Killer is also a compact novel with one thing or other happening in each of its pages but the story is woven with much rigidity compared to its counterparts. While pulp novels use the moral ambiguity of its protagonists for inserting more sex and blood into the story, in Compass Box Killer Piyush Jha uses it for creating complex characters.

My only complaint about the story is its lack of suspense. The motives and the identity of the killer could have been revealed towards the end of the novel. Otherwise Compass Box Killer is a taut thriller, with a good plot and decent characterization. It is an easy read. If you are in for some escapism find it here.

The book was received as part of Reviewers Programme on The Tales Pensieve. 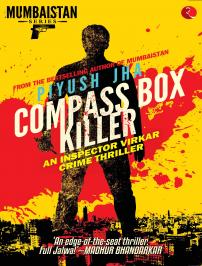