Around India In 80 Trains With Monisha Rajesh

Years back I had a wish to just get in the local compartment of a long route train and travel around without any plan. To take a break for a month from everything and live with just a backpack. Unfortunately at that time, like so many other fabulous wishes, this one too bit the dust. When I picked up Monisha Rajesh's book Around India in 80 Trains, I probably wanted to see my long back abandoned wish realized by someone else.

Monisha Rajesh, a British journalist of Indian origin, had lived in India in her childhood for a very short period with parents. They weren't comfortable with the living conditions and had returned back. After years she decides in favor of returning to take up a journey across India in 80 trains- clearly inspired by the classic adventure novel Around the World in 80 Days. She even calls her photographer travelling companion Passpertout! Just like the Passpertout in the novel there is a phase in the journey were he abandons Monisha 'Phileas Fogg' Rajesh, only to rejoin her later and finish the task on hand.

To her credit, Monisha has travelled extensively and in most of the variety of trains running in the sub-continent. From toy trains to locals to luxury coaches she has covered it all. But more than just travelling in them, she has inter-acted with passengers belonging to varied social strata, gender and professions and she then goes on to write about them in a funny yet touching way. What makes the book reach a higher level than many similar travelogues is the writer's background. Her bad experiences with living in India during her childhood has caused a cynicism to the general attitudes of Indian living. Her constant efforts to come in terms with this adds depth to the book. This is a book written with lot of honesty and good amount of wit.

On the flip side, some parts of the book seemed to be written in a rush. She doesn't write much about most of places that she visited. Of course whatever is there- temples of Karnataka, Golden Temple, Simla- are great to read. The book is more of an account of people she saw on the course of the journey. There are a few parts where her cynicism irritated me a bit. She knew what to expect when she took up this journey, then why to crib so much about insensitive beaurocracy, intrusive public, unclean surroundings...?

I would recommend Around India in 80 Trains to all who like travelling. It is a well written travelogue, honest and witty. 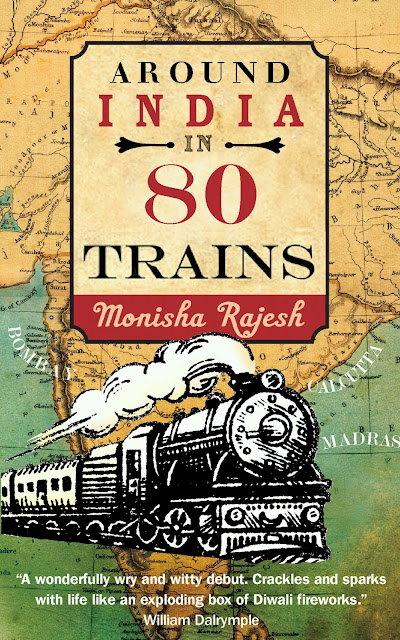 Labels: book, books, travelogue
Email ThisBlogThis!Share to TwitterShare to FacebookShare to Pinterest
Posted by Harish P I at 6:58 PM