The Accidental Prime Minister is a book bomb that fell on United Progressive Alliance headed by Indian National Congress (INC) last week, while contesting the country wide election for Parliamentary seats. Written by Sanjaya Baru, the former Media Advisor of Prime Minister Dr. Manmohan Singh, the book claims that the Party President Sonia Gandhi was the one who really headed the government and Dr. Singh did not had much say in taking important decisions. The book further declined the position of already allegations-hit INC in the elections by giving the opposing parties a good weapon to further poke them. Though everyone was aware of the position of Dr. Singh, the writer’s status as an insider in the Government and his close proximity to the PM confirmed the doubts.

The book deals with the happenings in the ten years of UPA rule with Dr. Singh as the PM, when Baru was in the PMO for first five years and an observer from outside privy to inside info thanks to his contacts in PMO. BJP, who were ruling previously, were the favorites to win the election, but finally were unable to secure the majority to form Government. Congress wanted Sonia Gandhi to take charge, but she couldn’t due to her foreign nationality. The only option in front of her was to install a Prime Minister who is ready to abide by her till her son Rahul becomes mature enough for the post. Manmohan Singh, a former Economist was chosen for the role. He had achieved the unthinkable ten years back.

In 1990s, under the Prime Minister-ship of Rao, who did everything possible to undermine the dynasty politics of Gandhi’s, Dr. Singh, then the Minister of Finance started the process of opening the Indian market to globalization, the benefits of which we taste even after decades. The cost paid for not bending his backbone in front of Gandhi clan and throwing License Raj started by Indira Gandhi into trash bin was very dear for Rao. After coming out of Prime Minister-ship, plagued by accusations, rest of the life he had to spend in courts and prison. He was acquitted finally from all the allegations against him. But even after his death, Congress and Gandhi’s denied him any privilege of a former PM. Even his achievements are not mentioned anywhere in Delhi Durbar.

I believe it was the ill-fate met by Rao that made Dr. Singh the way he was. As per Baru, during UPA-1, all his achievements were rewritten under the credit of Sonia and Rahul, except the clinching of nuclear deal from US. But then Rahul was not ready to enter the arena and Sonia had to appoint Singh as PM once more for the next term. But this time all the major scams hit the Government along with severe recessions. Finances of the country hit rock bottom. Though Dr. Singh himself was never corrupt, he was unable to take any action on the ministers whose loyalty was only towards Sonia. He was blamed for all the failures and these blames paved the way for Rahul to be announced as the successor.

The book is quite an easy read and there are hardly any new revelations in it. There are no exposures of any political secrets or scandals. It is a bit bland. Curious thing is that though the book gives out a negative feeling about Singh, the author actually tries to give Manmohan Singh more credit and appreciation than he was unable to receive from any quarters till date. There is no hatred or animosity and on the contrary we can sense deep respect in the narration. Baru gives his reasons for the failure of Singh in UPA-2 and tries to prove that UPA-1 was a success thanks to the talent of Singh. But his statement that UPA-1 government was able to start many populist schemes due to the good fiscal results that were due to the good work by previous Government gives away the built up. Also curiously missing is a proper insight into the relation shared by the PM and Sonia. That was essential for the reader to comprehend much of the later happenings.

If you are interested in Indian politics, you can get a copy of this book. It may not be insightful but gives some insight to the working of PMO and also narrates the tragedy of a genius economist (George W Bush once claimed Dr. Singh to be the best.) who will unfortunately be remembered as the man who missed the bus for India to the big leagues. 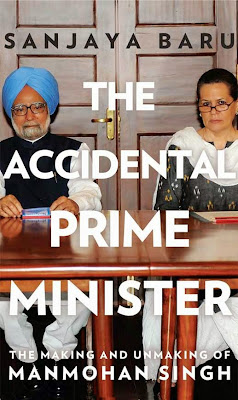 Labels: book, books, current affairs, memoirs
Email ThisBlogThis!Share to TwitterShare to FacebookShare to Pinterest
Posted by Harish P I at 1:59 AM