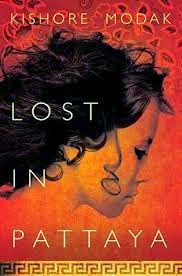 Lost in Pattaya is the second book by Kishore Modak, an author based in Singapore. It is published by Grapevine India. It is a short book with just 215 pages. I read it within two evenings after I received it for review. The book is set in Thailand and Singapore and deals mostly with the flesh trade that forms the economic backbone of Thailand. It also tries to sketch the abuse of alcohol and mind altering drugs, without being judgmental on the issue.

Palash Mitra is grief stricken after his daughter Li Ya gets kidnapped in Pattaya. He was there with his Chinese wife, Fang Wei and daughter on a vacation. What adds to his sorrow is that the girl was kidnapped due to him being distracted by his weakness for drugs. His marriage, which was still surviving only due to the kid, crumbled after his wife blamed him totally for their loss. His professional life as an auditor too started disintegrating after he decided to take a stand that could affect the business of his firm. Jobless and divorced, Palash soon gets engulfed in grief and turns to alcohol and drugs for survival. A meeting with a similar fated lady made jhim take a decision that altered his life- he decided to go and search for his daughter in Pattaya, where he believed she has fallen into the traps of child prostitution. His search in Pattaya lead him to Thuy Binh, the much revered and feared lady boss, who controlled the entire sex mafia in Pattaya and Miho her deadly companion. Will he be able to rescue his daughter? Will it be too late by then?

Lost in Pattaya is narrated from the view point of Palash, as a flashback. Only in the end it is revealed his true situation. The narrative is a bit loose and staggered and gives a feeling that it is told by a man still in the depths of the effects of drugs- a very effective technique that enriches the reading experience. It helped me to relate to the lead character, someone who is very unlikable and even abhorring at times. The plot is disturbing and violent, but the writer manages to breeze the reader through the tough subject due to his gripping narration and pacing. The language of the book is very different from any of the recent Indian writing that I happened to read. It turns coarse sometimes, poetical at some point, emotional or matter-of -fact otherwise.

I especially loved the fact that though the blurb in the back page seems to reveal almost the whole plot, the actual story turns out surprisingly different with its fresh approach. I hope to read more from Kishore Modak.
The book was received as part of Reviewers Programme on The Tales Pensieve.
Labels: book, book review, book reviews, books, Tales pensive reviews
Email ThisBlogThis!Share to TwitterShare to FacebookShare to Pinterest
Posted by Harish P I at 8:04 PM