Book Review: God is a Gamer by Ravi Subramanian

While reviewing his novel The Bankster some time back, I had written that the distance between Indian and international thrillers is rapidly getting reduced and Ravi Subramanian has had an integral role in it. Even his next novel The Bankerupt (will post on it some other time) confirmed my belief. So when BlogAdda offered a chance to review his latest novel, God is a Gamer, I gladly jumped in. Another factor that piqued my interest about the book was the fact that it is the first thriller about bitcoins- an online form of money that is untraceable and so has a huge risk of getting misused.

The novel starts by giving us certain basic information on the rise of bitcoins when major services like MasterCard and Visa blocked payments to WikiLeaks. Within months bitcoins were accepted as a means to donate for the whistle blower site and attained immense popularity. Bitcoins, the value of which was determined totally by demand for it, can be transferred digitally between individuals without the need of any intervention of banks or governments. It gave the additional benefit that the users cannot be tracked in any way. This anonymity caused the usage of bitcoins in several shady deals including purchase of illegal substances and services.

An influential US senator, a close aid of President is killed in Washington DC. In Mumbai Aditya, founder of Indiscape Gaming Corporation, meet his estranged son Varun after decades and takes him in his folds. Aditya's financial firm eTIOS is facing a dire situation as it is facing security charges from its prime customer NYIB, a new generation bank based in US because millions were siphoned off from many ATMs using an ingenious fraud. Meanwhile Varun, with his gaming skills helps Indiscape scale new heights. He has an affair with Tanya, daughter of Malavika, Indian head of NYIB. When Malavika is mysteriously killed, implicating the hand of none other than the Finance Minister, all hell break loose. Two FBI agents investigating senator's murder find out about a new fraud involving bitcoins, gaming, bankers, politicians and terrorists. How the dots are connected forms the rest of the story... 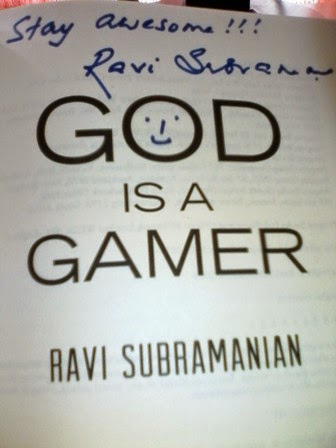 First, let me thank Ravi Subramanian for sending the autographed copy. I have received signed copies before but along with the personal message, I loved what he did with the book title.

With God is a Gamer, the author has managed to cover the gap that I was mentioning in first para- the one
between Indian and international thrillers. Its the best thriller written by an Indian that I have read. The writing is faultless. The story is very elaborate and cover a lot of ground. The concept behind bitcoin is explained really well. Also how online gaming is packaged through social media to get maximum visibility is explained. Commendable research is evidently done on these. And I never felt bogged down by explanations because Ravi has embedded them with his main plot masterfully.

The narration happens in bits and pieces. Within first fifty pages the reader acquaints with many characters and several subplots that are seemingly unrelated. Yet by the end, like a complex jig saw puzzle, every bit is fitted in its place with a neat climatic twist to top it off. The pace of the narrative can be described in one word- frantic. I loved the fact that instead of wounding the story around a single heroic character, as is the norms, Ravi chose his book to be a plot driven one. We get lots of great characters in different shades, major or minor, each of them integral to the big picture. There are a couple of typos and minor grammatical errors, which I am mentioning because, with Penguin as publisher, even these are unacceptable.

This review is a part of the biggest http://blog.blogadda.com/2011/05/04/indian-bloggers-book-reviews" target="_blank"> Book Review Program
for http://www.blogadda.com" target="_blank">Indian Bloggers. Participate now to get free books!
Labels: blogadda reviews, book, book review, books
Email ThisBlogThis!Share to TwitterShare to FacebookShare to Pinterest
Posted by Harish P I at 1:59 PM