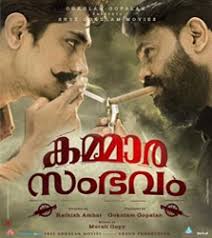 Kammara Sambhavam is a movie about rewriting the past to manipulate the present. This is an ever relevant topic, something that has been happening, is still happening and will always be repeated till the end of human race. The team behind this movie deserves a pat on the back for attempting something like this on such a grant scale, within the framework of commercial Malayalam cinema. The movie starts off as a lavish period movie and then evolves into a biting political satire by the end.

A minor political party needs a mascot, whom they find in an old freedom fighter Kammaran Nambiar whose story they found in a book written by an English officer. They decide to make a movie to educate people on the contributions of Kammaran. But then they realise the truth, that what happened actually wasn't as rosy as depicted in the book. Still they decide to go on with their agenda, tinkering history to their needs, adding masala elements to concoct a massive pot boiler of a movie.
The movie is shot wonderfully well. The locations are great, the acting is superb and its technically pretty awesome. Dileep and Siddharth does a commendable job with their roles, as well as the supporting cast. First half of the movie is incredible and immerse you in with some good suspense and great characterisation. But... 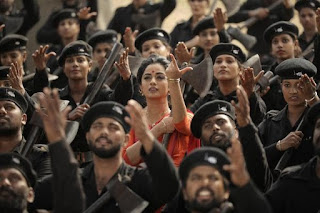 But, it is the second half that spoils all of it. I won't go as far to say it is bad, but still that part of the movie is jarring. In the second half they show you the movie they made within the movie. This movie is the one that's supposed to make the common people to like and idolise Kammaran. Well, it doesn't... I really wanted to like it after investing a lot on that great first half, but I could not. I know it is a great concept, something never attempted before, but the makers couldn't pull it off convincingly.

To summarise the movie, first half is a good period piece and second half is just a bit better than a Jalian Kanaran comedy skit. I would still recommend this movie for its great message and the incredible first half.
Labels: history, malayalam, movie, movies, satire
Email ThisBlogThis!Share to TwitterShare to FacebookShare to Pinterest
Posted by Harish P I at 7:57 PM