A Time When Scandal Drove and Science Took Backseat...

Saw an interview of Nambi Narayanan on TV yesterday. One of the most talented scientists ever born in our country. And also one who was the most vilified wrongly for political gains. With decades of experience behind him, he was heading a prestigious project of ISRO when he and some others were arrested in 1994 for suspected espionage charges. Even before the court took up the case, media pounced on it and pronounced the accused as wrong doers. Espionage case or chaarakkesu as Malayalam media termed it, was celebrated by all when the involvement of two ladies from Maldives gave it a sexual angle.

The presence of a top cop who was close to then Chief Minister was used by opposition and factions within the ruling party to revolt against him. CM had to resign following allegations that he was aiding the accused. Case was transferred from local police to CBI. They found out that the case was false. Media, public and politicians were dissatisfied and wanted a reprobe. When State Government ordered local police to take up the case again, all accused approached Supreme Court. In 1998 SC cancelled the probe and directed the government to compensate the accused for their physical and mental sufferings -which was never done. Another direction from SC was to probe and bring the culprits who were responsible for fabrication of the case, which also is not done yet.

If we go in depth, we can find many behind the screen maneuvers that made the case sensational in public eyes and pronounced Nambi Narayanan and co-accused as monsters who betrayed the nation. Media gave enough publicity by peddling half truths and outright,  made up lies just to increase their circulation. Rivals of CM- in his own party and opposition used the oppertunity to evict him out of power. And we the public, ever hungry for scandals, fell for the propaganda.

But why this false accusation was made first of all? The Wikipedia page of Nambi Narayanan give the crucial clues. I will reproduce the excerpt below:

"In 1992, India had signed an agreement with Russia for transfer of technology to develop cryogenic-based fuels.The agreement was signed for Rs 235 crore,when the US and France were offering the same technology for Rs 950 crore and Rs 650 crore respectively.Documents show that US president George H. W. Bush wrote to Russia, raising objections against this agreement and even threatening to blacklist the country from the select-five club. Russia, under Boris Yeltsin, succumbed to the pressure and denied cryogenic technology to India.To bypass this monopoly,India signed a new agreement with Russia to fabricate four cryogenic engines after floating a global tender without a formal transfer of technology.Isro had already reached a consensus with Kerala Hitech Industries Limited (Keltch) which would have provided the cheapest tender for fabricating engines.But this did not happen as the spy scandal surfaced in late 1994."

When we take into consideration the fact that Nambi Narayanan was the head of cryogenic in ISRO, dynamics become clear.

What were the ramifications of the scandal? ISRO, a premiere research organization lost its credibility within and outside India. Several breakthrough technological projects were delayed or stalled pulling Indian space research back, severely hampering national development. Scientists were generally considered unreliable by public. Science as a discipline, lost its sheen. Youngsters found a profession in research in India unsafe, giving one more excuse for brain drain. Ultimately we, Indians lost.

It took huge hard work of decades and today ISRO is back in limelight with the phenomenal success of Mangalyaan. You may think on this great occasion why I am retelling this sad tale. Its not for taking the gleam out of victory celebration. This story should be engraved on all of our minds, so that we as a nation, irrespective of our ethnic, cultural and ideological differences, stand behind the people who are striving to make a positive difference in our lives. 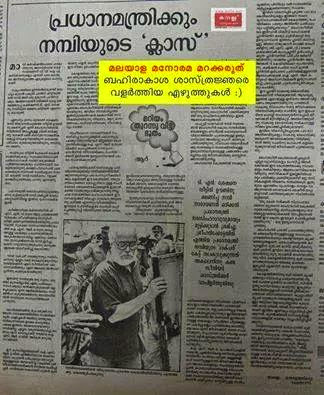 Labels: current affairs, India, science
Email ThisBlogThis!Share to TwitterShare to FacebookShare to Pinterest
Posted by Harish P I at 7:22 PM