India as a nation is going through an interesting phase. We are facing an election that suddenly has opened up an opportunity for citizens to decide where we are standing as a nation and what should be our path to future. Thanks to social media we are aware of the corruption happening around us and at least some of us has got platforms and are showing an initiative to fight the system and change it for good. Technology inside the country is growing by leaps and bounds. We are using the technology from West for the betterment of life and at the same time spearheading projects involving cutting edge, innovative ideas. These aspects are reflecting on our literary field too. Writers are using these developments for innovative story telling. One such attempt is the novel, The Winner's Curse written by Dee Walker.

Harsh is a successful business tycoon and the protégé of Master, the political leader of Popular Party. Master's dream is Jan Shakthi, a project that can bring complete transparency into the dealings between public and government, thereby eliminating corruption and black money from system. Harsh, as a loyal disciple, is committed in realising it. But unknown to him, Master is planning to make Jan Shakthi a project that can provide him dictatorial power on a platter and Harsh, a pawn in his scheme. What follows is a rollercoaster ride involving business, politics, crime, conspiracies and intrigue.

The book is based on The Ten Commandments of IIT. Harsh is an alumni of IIT and so are most of the important characters. The story tries to show case different outlook people passed out of this premier institution has towards life and how their actions based on them affects others around and the nation. The Winner's Curse is a book with a tight plot with many subplots interwoven to the main one. The narration is very fast paced. Author succeeds in building up the curiosity till the end of the book. He throws plot twists toward readers in regular intervals and the story is never predictable.

My major grievance with the book is the presence of many flashbacks that most often causes a lag in the otherwise smooth narrative. Many of them does not have any major connection with the story. Also the writer could be careful when writing about things that are unfamiliar to him. Like, I doubt if l a man with the surname Mishra can ever be the Chief Minister of Karnataka.

Overall I feel the book which deals with corruption and the politician- criminal- businessman nexus is an entertaining read thanks to the breakneck speed of the proceedings. The author, Dee Walker has self published this novel as an eBook. I give him my best of luck with book. 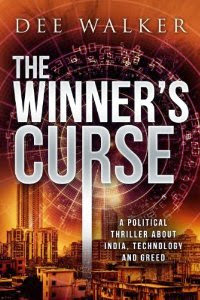 Labels: book, books, current affairs
Email ThisBlogThis!Share to TwitterShare to FacebookShare to Pinterest
Posted by Harish P I at 3:25 AM