For writers around the globe, wars were always a treasure trove of inspiration. Every war generates its own share of stories in every color. Among all the wars, The Second world War remains the one that has been a constant source of inspiration to countless story tellers. One reason may be its magnitude- most of the nations took sides in that war and fighting happened on almost all the continents known then. Another reason may be the unpleasant memories of the holocaust. That atrocity of men against men has generated a separate genre in literature. The war novel, Early One Morning by Robert Ryan is an attempt to tell a story based on the resistance movement within France against German Invasion.

Most of the major characters in this novel are either ones who really lived, or is loosely based on real people. The story starts when an English man, William Grover- Williams enters the arena of car racing and become a major figure driving for Bugatti. Robert Benoist, the French man who led the team till then becomes his major rival when both of them fall for the affection of same lady- Eve Aubicq. Later Williams marries Eve and eventually he and Robert become thick friends. The break out of Second World War and subsequent invasion of France by Germany causes them to start a resistance movement against Germans within France aided by British secret agency. The war becomes a field to test their love, loyalty and honor.

The story unfolds in two different time lines. One follows an old woman, Rose Miller, in 2001, trying to explore the contents in an old car buried deep inside a lake in Austria. Another one starts inside an artist’s studio in Versailles in 1928, and follows the rise of Williams as a race car driver and his involvement in French Resistance against Germans. Both narratives merge at the end, when we find out the mission of Rose Miller. The tempo of the novel is quite slow at the starting. It takes its sweet time in establishing the characters and the premise. There is no much action in the initial parts other than car racing.  But this initial built up helps us in appreciating the action that follows during the war, because by that time we start feeling for the characters thrown into a whirlpool of love, friendship, betrayal, loyalty espionage and violence.

I enjoyed reading this early novel from Robert Ryan. It is epic, entertaining and has something for everyone. Combining of fact and fiction is technique that requires skill. Robert Ryan is at ease doing it. I would recommend Early One Morning for those who like their stories well told and don’t mind a bit of inaction in a story about war. 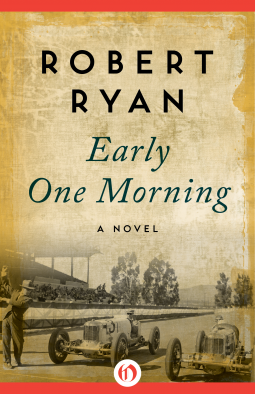 Labels: book, books, war
Email ThisBlogThis!Share to TwitterShare to FacebookShare to Pinterest
Posted by Harish P I at 5:42 PM