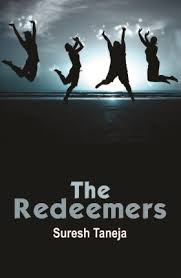 One major problem plaguing India is rampant corruption. We find this Frankenstein's monster attacking us more or less in every walk of our social life. The public is so frustrated of this evil that any movement that tries to curb it gets tremendous support. People are ready to back any politician of any ideology if they can guarantee corruption free governance. Still no one is any where near rooting out this evil from our country as the roots are so strong and deep inside our core. Moreover if anyone tries to come out of this vicious circle, dark elements of our society puts so much pressure on them, that they eventually buckle.

Suresh Taneja, through his debut novel The Redeemers, tries to put forward a positive plan to eliminate corruption from society. The Redeemers is the story of four youngsters who are destined to start a movement that takes India to the most prosperous of the world nations. The story is told in flashback, when the kids of G4, the collective name of four people who are responsible for this feat, demands them to tell how they achieved it. Vikram, Yuvika, Akshay and Manisha are four smart youngsters who wants to enjoy their vacation together. But destiny intervenes and a cycle of events make them see and experience some really dirty scenes of corruption in grass root level of society. They are shaken to the core, but decides to do something to change the situation. The story is about how they, with the help of a TV show host, starts a movement that changes the future of a country for good.

The Redeemers is the second book of Taneja. In fact it is a elaborated re-telling of his first novella with certain changes to make it more interesting. Author claims his intention is to catch the attention of youngsters who as per him holds the key to a bright future for the country and the world. The Redeemers is a feel good novel, which can inspire and entertain its target audience. One major incentive to read this novel is the writer's good intention. It put forward the virtue of nobility, the necessity to do the right thing, even when everything around us tries to deviate us from it. It does it without being overtly preachy, which I feel works tremendously in its advantage.

In the minus side, the characterization leaves a lot to be desired. The author spoils the potential to make his four protagonists interesting. All four of them talks, behaves and acts in a similar way! Compared to them, I feel their parents are etched more deeply in my mind due to their realistic and convincing portrayal. The plot of the novel is also very simple, where every obstacle seems to be lifted off the path of protagonists very easily. No nail biting moments here. All their adversaries don't even wait to hear the outline of their full plan to become their advocates!

Still I think the plan given in this book to root out corruption is really genius. Instead of starting from topmost levels of hierarchy, the idea to confront corruption at the basic building block of the society- the family, is a very convincing proposal. My thumps up for that, though the result may not be as easy or complete as discussed in The Redeemers.

Labels: book, book review, politics
Email ThisBlogThis!Share to TwitterShare to FacebookShare to Pinterest
Posted by Harish P I at 12:58 PM