Chennai Express: A Ride To Nowhere

I too watched Chennai Express. Its not good when a movie becomes a record breaker in such a short time period and you are the only one left to watch it. So I did it. The last blog post I made about a Hindi movie was the post titled The Crime of Bol Bachchan. It was also a Rohit Shetty movie, like Chennai Express. Its natural that people will think I watch only his movies after reading my posts. That's not the case.

The fact is that when Mr Shetty makes a movie, how much big trash dump it happens it to be, he makes sure absolutely no one escapes falling in it. For me Bol Bachchan happened because it was tagged as a Golmaal remake. I am not implying his movies are trash. What I meant is that he makes and markets them in such a way that finally many ends up watching them and even getting entertained by them. When his first movie Zameen released, I liked it. Fights were cool, some of Ajay's scenes were excellent though meant strictly for front benchers and at that time any movie were Bipasha appears fully clad in a saree was definitely way ahead of times. Even Singham and Sunday were entertaining. Golmaal was watchable, but subsequent parts were too loud and confusing.

Speaking about Chennai Express, it does not have a tight plot, cars fly in action scenes, have characters that are loud and are stereotyped caricatures, have situations that serves only for baffling viewers and not to move the story forward and no sensibility is shown for the feelings of old, disabled or people from South- very much Rohith Shetty. Shahrukh walks through the entire movie making faces- very much Shahrukh. He makes faces at Deepika, Sathyaraj, the main villain, all other minor characters and even at the camera, wondering all the while why he is not getting the girl and why so many people are behind him, all eager to bash him up. Deepika is the surprise package- her character is Tamil, but her Tamil no where near passable, her accented Hindi is much worse. Songs are ok, action is good, sets are fine, picturisation fabulous. I laughed out loud exactly 10 times making the movie significantly better than Bol Bachchan. But ultimately I enjoyed the movie (like how such movies are enjoyed usually) though it was mostly pointless and kind of dragging at middle. 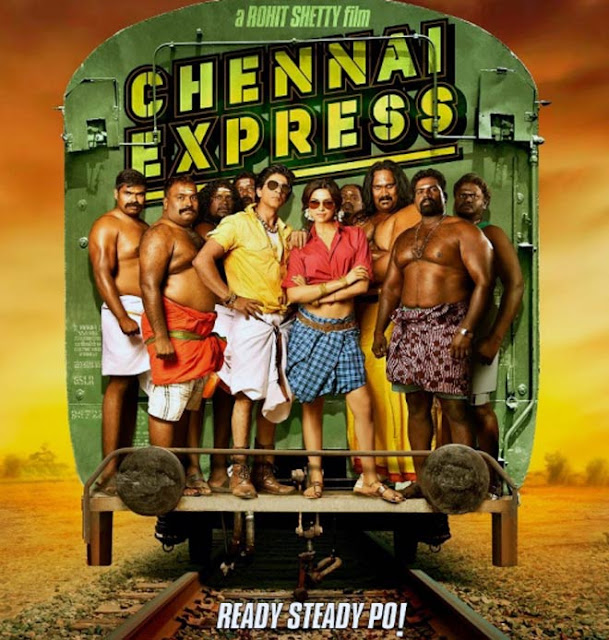 Labels: hindi, movie, Shahrukh
Email ThisBlogThis!Share to TwitterShare to FacebookShare to Pinterest
Posted by Harish P I at 7:29 PM