Before I started reading NOS4A2, the blogger friend to whom I asked the opinion about the novels of Joe Hill answered me that she had read only The Horns and that book was crazy. So when I picked it to read, I was almost aware what was waiting for me. For the uninitiated readers, Joe Hill is the son of master of horror stories, Stephen King. Now, I had read only one novel of King, Insomnia, and was not impressed. I am sure my start was wrong, but I never felt like picking another of his after that. After reading NOS4A2, I am planning to read more of King.

NOS4A2 is the story of Victoria "Vic" Mc Queen, who, as a kid has the supernatural ability to find lost things when travelling through an imaginary bridge on her Raleigh cycle. These journeys take high toll on her, physically and mentally. Once she stumbles upon Manx, a man who kidnaps kids from troubled houses and takes them to Christmasland, a horrible place he created inside his mind, in an old Rolls-Royce Wraith, with a number plate NOS4A2 (a reference to the old movie Nosferatu, a Dracula remake) and makes them prisoners for life. Manx kidnaps her, but she becomes the only kid to escape from his clutches, causing his arrest in the process. Years later Manx escapes from prison for taking his revenge. He succeeds in taking Vic's kid Wayne for hostage. Vic who has outgrown her Raleigh, follows Manx to Christmasland in an old motorbike along with her husband Lou. Will she be able to rescue Wayne from the eternal prison of Christmasland?

NOS4A2 is the first proper horror novel that I read after Dracula. (It is tall praise, but the fact is that I have not read many horror novels yet.) Joe Hill succeeds in making the reader to glue in with the proceedings. The plot is a bit complicate, but worth the effort from reader. The book follows a non-linear narration till around half its length. The narrative is creepy and convoluted. The details are gory and graphic. The atmosphere is totally dark and gloomy. The length of the book is huge, but the pace of the story keeps the reader engaged. The characters of the protagonist and antagonist- Vic and Manx will involve the reader very much. Other characters are also good, but all of them seem severely mentally unstable.

Even if the story spans 700 plus pages, NOS4A2 manages to be a good page turner. I would recommend this book to any reader who will care for a good old, creepy horror story. 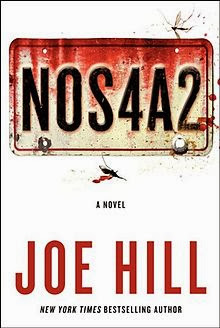