The Fist of God by Frederick Forsyth

Frederick Forsyth writes spy thrillers in which fact and fiction is blended in such a way that it is difficult to guess which is which. Many of his novels have explosive actual events as the basic plot to which some fictional characters and events are embedded. I have read a few of them and The Fist of God automatically figures in the top of the list due to the meticulous research that has gone into the writing of that novel and the sheer magnitude of its plot. The Fist of God is set during the first Gulf War when Iraq invaded Kuwait and deals with the frantic search of Allied Forces (US–British) for a secret weapon of mass destruction that has the potential to change the outcome of war and code named The Fist of God by Iraqis.

The year is 1990, a few days after Iraq has invaded Kuwait. International community is putting pressure on Iraqi leader Saddam Husain to withdraw from Kuwait or face the attack of the Allied Forces that can take Iraq back to stone ages. Saddam’s reluctance to do it make the Allies to think that he has something in his sleeves that will be used in case of any military action against him. A mention about The Fist of God in a radio message from Iraq make them suspect it is a weapon code named The Fist of God, which he will use against any invading army. Only person who can provide information is a mysterious insider code named Jericho. He works for Mossad, but is dormant from some time. Mike Martin has to enter Baghdad as an Arab, establish contact with Jericho, find out the secret of The Fist of God and foil the plans of Saddam. The Fist of the God, which spans for more than 600 pages, is a very long read, but keeps the reader engaged most of the time.

There are many descriptive passages about warfare technology throughout the book which will interest the readers of the genre. Many real life personalities make appearance in the novel- prominently Saddam, who is a major character. George Bush, Thatcher and many others appear in the story.The plot is brilliant and dazzling with sophisticated use of technology. The line between fact and fiction seems to be narrow that it made me feel the scenario in this book is plausible. But the book falls way short in characterization. None of the major characters manages to create a sense of depth. Some of the plot twists are evident to the reader from miles away, but the characters never come to realize them. And sometimes comes the feeling that our hero is achieving things in a way too easy. But while reading The Fist of God, the atmosphere of the novel was so tense that I ignored these shortfalls. The Fist of God is an interesting and gripping read which manages to keep the reader forget its shortcomings at least while he is reading it. 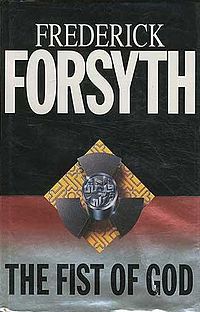 Labels: book, books
Email ThisBlogThis!Share to TwitterShare to FacebookShare to Pinterest
Posted by Harish P I at 11:50 AM