Last month I had been to Pollachi for a good friends marriage. G is a great guy, wonderful friend, ex colleague who had been a good support to me when I used to work in FPL. He used to take care of system administration and we used to call him 'the father of ERP' because he was responsible
for ERP entries of daily production through us. We, myself in production department and S from Quality used to make such a fuss about entries, enough to test the patience of a snail. But G used to settle the problems however trivial they are and appease us along with our department heads, who takes the sides in our quarrels and fight each other... Those were good old days. I left the company for another job and last month received the invitation for G's marriage.
So that was how I found myself in train to Coimbatore, calling another dear friend and ex colleague AL, who works in Coimbatore. Heavy rush was there in train, but I got a seat soon enough and was peacefully conversing with fellow passengers. There were an elderly couple who was returning after visiting their children settled in Bangalore. And we talked and talked about topics ranging from lone parents, local problems in villages of Kerala, till train reached Coimbatore.
By six I got out of station, called AL, went to his room freshened up, chatted the heart out. It feels great to meet friends after a long time. So lot to catch up. On life, friends, family, job, future, movies, books, internet.... on and on and on.... Then we watched a Tamil movie Singam, Suriya's action blockbuster that was a formidably fast paced watchable  flick that entertains... Afternoon AL treated me to Pork fried rice and Roast fried Pork with Honey Sauce, in the same restaurant were we had went couple of years back to celebrate his Birthday... Fried rice was good while Roast fried Pork and honey sauce was heavenly... Pity I did not take a photo of that dish.  Then we chatted till five pm, when his room mate arrived who dropped me on the way to Ukkadam from where I can get the bus to Pollachi.
The venue was at Kinathukadavu half way between Pollachi and Coimbatore. I had forgot to buy the wedding present, which I bought from a small gift shop nearby... It was a small, lovely table clock, but the lady in the shop wrapped it with such colourful paper that I was embarrassed to hand it over. The reception was great, my friend, dressed smartly in a cream color suit, greeted me, introduced to his family, had a great dinner and left with his friends to Pollachi where the stay was arranged. His friends where a jolly good lot, had a great time in their company and the hotel room was also very comfortable.
Next day function was at 7:00 am, so started from hotel at 6:30, but courtesy his friends, got down at wrong place delaying us another one hour. the marriage was colourful and musicfull as in any Tamil function. The back ground music was surprisingly our own Thayampaka, may be because Pollachi was a border town. The breakfast was quite an overdose with dosa, idly, upma, pongal, poori and sweet. My ex colleagues who missed the reception thanks to late coming had also arrived. Pleasantries where exchanged and they offered a lift back to Bangalore, which I was only happy to accept. They had chartered a Tempo trax  and had enough space in it for me too.
After function we started our return journey, and they had a plan to visit some tourist spots. Lot of arguement was made over whether to choose Monkey falls, which is nearby or Hogenakal falls that was on the way. Probably because of the disinterest generated by the mental picture of a falling monkey, Hogenakal was decided as the next destination. There were 9 of us including me- RC, who is Quality mgr, RR, my ex boss and Production manager, HP Design Mgr, LS, the purchase mgr, Pr Planning Mgr,  P Sr design Engr, BB, Jr Design Engr and MR, the HR executive.
The return journey till Salem was passed by continuous games of Rummy, and we even forgot to have our lunch. When finally we reached Hogenakal it was around 5:30 pm and we were thinking to return back just by watching the falls. But the boat rovers persuaded us to go in the river and finally we made the decision. It was worth the time and money. The journey was awesome. There were huge rocks all around and waterfalls, small and large many sides. The thatched, round boat can accommodate 5 persons and the best part was when the rider rotated it fast, many times. It was scarier and enjoyable than any roller coaster rides I had taken in my life. We had a field time shouting and screaming. Then we were taken to an island where they fries fresh fish caught then and there on order. All of us, about to die of hunger finished off every fish they had stock. It tasted great and we were licking our hands for a long time afterwards. 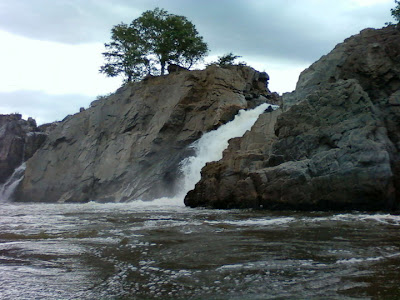 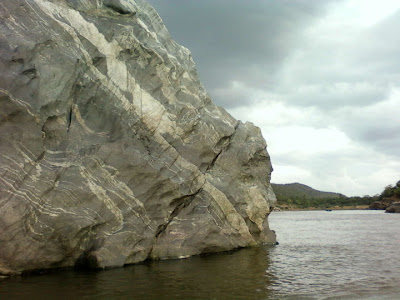 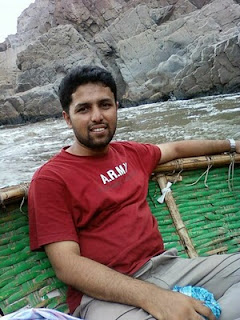 There were two guys giving body massage to tourists. All were stripped and ready for a full body massage except me and BR, who was the official photographer. I changed my mind in the last moment and decided to take it. It was an assault... Every muscles and joints where submitted to rigorous banging skillfully which relieved the whole tension out of them.  The practitioners had studied the art from some expert in Kerala. After massage came the scariest part, bathing in the waterfall. Scary because it was dark and the lighting near falls was not working. But some how we managed to reach the falls and took bath in it. Once entered in it was really difficult to get out. Water with a formidable force hitting you from all sides... after 10 minutes I was feeling like I am truly cleansed... Finally we returned from there at night 8:00 pm. We could not take any pictures as it was too dark.
Reached Bangalore by 12:30 mid night and stayed in HP's home that night. If you want to spent quality time near Bangalore, I will recommend Hogenakal Falls, 3 hrs from Bangalore and do not avoid boating, fried fish, massage and a superb bath in the falls...The package is just superb...