Magnificent Delusions: Pakistan, the United States and an Epic History of Misunderstanding

"Pakistan wanted to be able to act like Hafez Assad’s Syria while demanding that the United States treat us like Israel."

If there is a quote that summarise the whole 350 page of Husain Haqqani's book Magnificent Delusions: Pakistan, the United States and an Epic History of Misunderstanding, 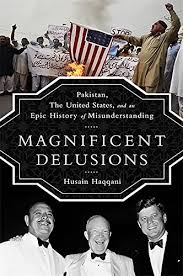 it is the above written one. Husain Haqqani, who has served as the Pakistan's ambassador of the US and has had first hand experience of the relationship between the two nations, has written this insightful account on US-Pakistan relation through decades.

Our neighbor who came into existence as a nation at the same instance that we, Indians gained our independence, always harbored a huge inferiority complex and an irrational fear with respect to India. The founding fathers of Pakistan decided that its foundation has to be this unreasonable enmity. Successive Pakistani Governments or their public were forever unable to shirk this mentality off them, thereby fatally compromising their economic stability. They were obsessed with arming themselves in preparation for an impending war with India and emptied their coffers for this end. Another result of this obsession was the interference on its army in its politics and several military coups that further impeded its progress.

The book makes it clear that Pakistan, from its founding days led by Jinnah, aspired to align with US and find security in their mighty arm power and dollar supremacy. It is a great strategy, but Pakistanis, the Governments and the public, over time felt entitled over this relationship. They believed themselves to be more important to the west strategically than they actually were and started to get more demanding. Refusal of Americans to partner with their military actions against India and the interest of successive US governments on Indian cooperation caused suspicion among Pakistanis causing widespread anti-US sentiments in the country.

But what may be the thought process of several US politicians and bureaucrats over successive decades, that convinced that Pakistan can be a strategic ally who can counter the communist USSR or can build a bridge that connect US to emerging China and Islamic middle east? It seems that most of the US diplomats who were initially impressed, were so because of the warm personalities of Pak state heads. Jinnah, Ayyub Khan or Bhutto, every Pakistani leader, military or civilian, went out of their way to court US diplomats through establishing personal relations, by being overtly generous. Over time, they and their successors tried every trick in their book to arm twist US into falling into Pakistani trap and providing military and economic aid. Indian leaders' staunch refusal to abandon their non-alignment policy and their perceived warming to USSR also helped this cause.

The book is a very interesting read and gives a detailed report of the absorbing drama that played out in Islamabad and Washington DC in which both the main characters failed to achieve anything significant from their relationship. It turned out to be a farce, where one character's over obsession and over demanding nature gradually caused resentment and heavy heart break.

Email ThisBlogThis!Share to TwitterShare to FacebookShare to Pinterest
Posted by Harish P I at 9:58 PM